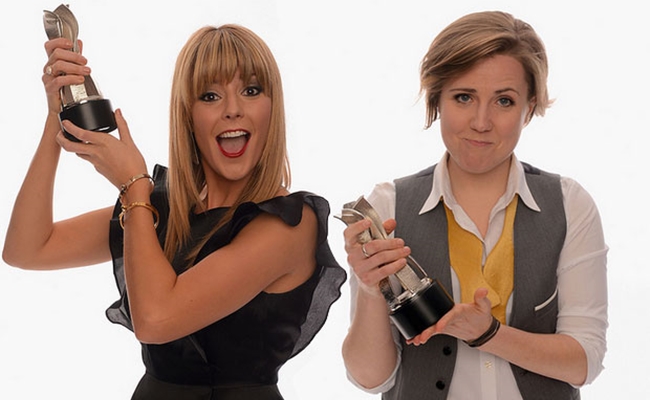 The fourth edition of the Streamy Awards is set to roll into Los Angeles, and one of YouTube’s most dynamic duos will take up hosting duties. Close friends and frequent collaborators Grace Helbig and Hannah Hart will host the Streamys ceremony, which will take place at The Beverly Hilton beginning at 7:30 PST on September 7th.

Helbig and Hart are both well-established YouTube personalities; Helbig creates vlogs on her It’s Grace channel, while Hart shares boozy recipes on her My Drunk Kitchen cooking show. The most notable partnership between the two of them came earlier in 2014, when they teamed up with fellow YouTuber Mamrie Hart for Camp Takota, a feature-length film set at a summer camp.

“The Streamys will be filled with memorable moments, show-stopping performances, and plenty of surprises,” said Helbig and Hart in a statement. “We’re overjoyed about hosting this year’s show together and spotlighting our talented peers who are ushering digital entertainment into the mainstream.”

Helbig and Hart will emcee a show that will see online video excellence honored across 47 categories. Two of those winners are up to the fans, and voting in those Audience Choice categories is now open at the official Streamys website. Here are the nominees:

Entertainer of the Year:

Show of the Year:

Go forth and vote for your favorites, and be sure to tune into streamys.org on September 7th to watch the show’s official live stream.

Full disclosure: The executive producers of the Streamy Awards, Joshua Cohen and Drew Baldwin, are co-founders of Tubefilter