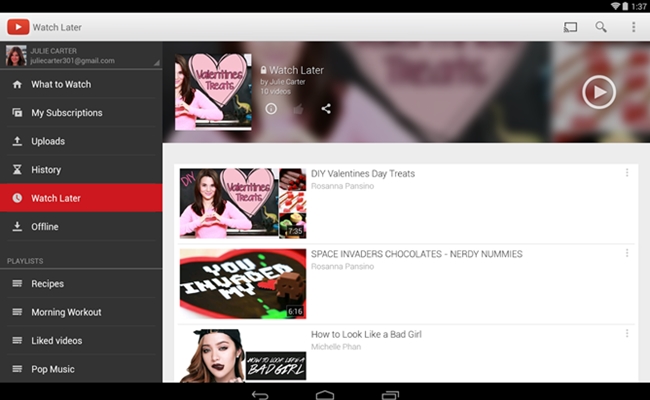 With all of the hubbub over YouTube’s oft-delayed music service, it’s easy to forget that there is another long-rumored YouTube feature that has yet to materialize. In September 2013, a YouTube blog post introduced the ability to save videos for later and watch them without an active Internet connection. Nearly one year later, that feature has still not yet arrived to the public, but some new screenshots of the YouTube Android app show an updated version on which offline playback appears to be available.

The new screenshots were first noted by Android Police, but they can be viewed by anyone who heads over to the Google Play store’s official page for the YouTube app. In the pictured version of the app, a new tab reads “Offline”, and it presumably contains a playlist of videos that have been downloaded for future viewing.

Android Police suggests that the new tab is part of an updated build available only to Google employees. This would fit in with previous developments, since a previous app update included lines of code related to offline playback. The main takeaway here is that, as with YouTube’s music service, the offline playback feature is probably already built.

Offline playback seems like a much simpler process than music distribution, and it’s a feature that app users seemed excited about, so why hasn’t it launched yet? It’s possible that YouTube is being very careful with new services in order to avoid any launch-related snafus. Another idea is that the site wants to work out a way for pre-roll ads to work with offline videos. Or perhaps Google’s employees want the feature all to themselves. I guess interested users will have to move to Mountain View to get their hands on the new update.