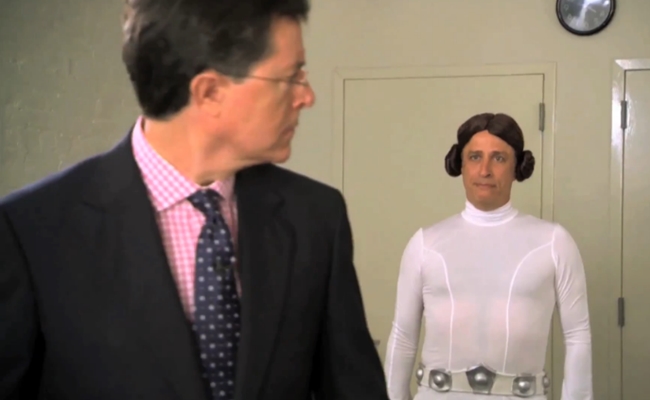 Jon Stewart And Stephen Colbert Have A Lightsaber Duel For Charity

In case you haven’t heard yet, consider this a reminder that a role in the upcoming Star Wars movie is up for grabs. The cameo, as explained by director J.J. Abrams back in May, is linked to a charity drive on crowdfunding site Omaze.

The drive is down to its final week, so its creators have called in everyone’s favorite Comedy Central late-night duo for some last-minute promotion. Jon Stewart and Stephen Colbert have starred in a video that supports Star Wars: Force for Change and the ongoing Omaze campaign.

In the video, Colbert and Stewart describe Force for Change, discuss the grand prize of the Omaze campaign, and square off in a duel to determine which one of them is the bigger Star Wars fan. Ultra-nerd Colbert would definitely take that title in real life, though Stewart’s willingness to dress up in a perfect Princess Leia cosplay cannot be ignored.

Force For Change is the name of Disney’s plan to use the Star Wars universe as the basis for a charity drive. Donors to the initiative support UNICEF’s Innovation Labs, which work to make life better for children in developing countries around the globe. The charity’s online campaign is one of several notable ones Omaze has hosted; the site also launched a project in tandem with Arnold Schwarzenegger and Epic Meal Time and another one with Mary Louise Parker and Hannah Hart.

Omaze’s Star Wars campaign was already a golden opportunity for the movie franchise’s fans. With the addition of the Colbert bump, it will receive even more much-deserved attention.