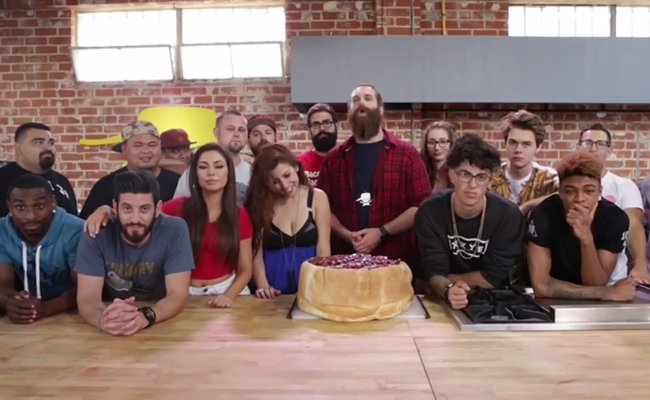 In their four years of extreme cooking, the Epic Meal Time crew has dumped hundreds of pounds of bacon on top of its creations. The salty cut of pig has topped everything from turkey to tacos and has appeared in all of the web series’ episodes.

Now, a major brand is taking advantage of bacon’s omnipresent Epic Meal Time role. Collective Digital Studio, which is partnered with Epic Meal Time, has announced a deal with Hormel through which the food company’s Black Label Bacon brand will become the official bacon of Epic Meal Time.

The partnership will last for a year, over which Hormel plans to supply more than 1,300 pounds of bacon to Harley Morenstein and his band of sous chefs. That amount will cover all the bacon needs of the main Epic Meal Time show while also leaving plenty of strips for Handle It, the EMT web series that provides viable recipes. “Harley Morenstein epitomizes our brand as someone who doesn’t just eat bacon, but lives and breathes bacon,” said Noel Haan, Executive Creative Director at BBDO Minneapolis, which brokered the deal on behalf of Hormel. “We are excited to contribute to EMT’s mission of developing exceptional recipes that raise the bar and contribute to the phenomenon that is bacon.”

The official bacon of Epic Meal Time is on display in the channel’s latest video, where its kitchen-bound stars teamed up with Sam Pepper, Mazzi Maz, and Harrison Webb to make a gigantic peanut butter, jelly, Nutella, and bacon cake.

Epic Meal Time has featured several brand partnerships in the past, teaming up with the likes of Netflix and Carl’s Jr. Morenstein has previously stated that he only teams up with brands he himself enjoys; by that guideline, the Hormel partnership is a perfect fit.