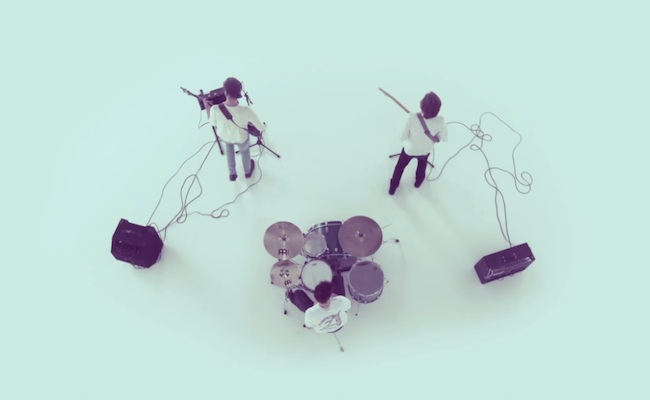 In June 2014, London band Looks dropped the video for their single “Everest”. Right off the bat, from the opening pop of the snare drum, the song grabs ahold of you and won’t let go until the final bars fade out. It’s a pop-infused, riff-happy track that’s made for a live setting. It’s impossible not to dance along to the pulsating bass line and layered choruses as the video amps up to the kinetic finale.

“Everest” is a minimal, yet energized, glimpse of an up-and-coming act that’s sure to make bigger waves once they have more tunes to spin. The clip is set in a whitewashed room, stylized with key lighting and slow motion, leaving the band to rock out with the ever-growing intensity of a concert. The aesthetic is definitely familiar, but the song and stage presence of the band is what sets this shimmery synth pop tune apart.

What makes Looks’ exciting is their potential. The dearth of music on their Soundcloud and YouTube channels only means there’s much to look forward to in the near future from this three-piece. The single is out now on vinyl via Killing Moon Records, a label that has a knack for finding and cultivating great bands that might go otherwise overlooked. So, be sure to subscribe for Looks‘ upcoming new videos and check here for upcoming tour dates.