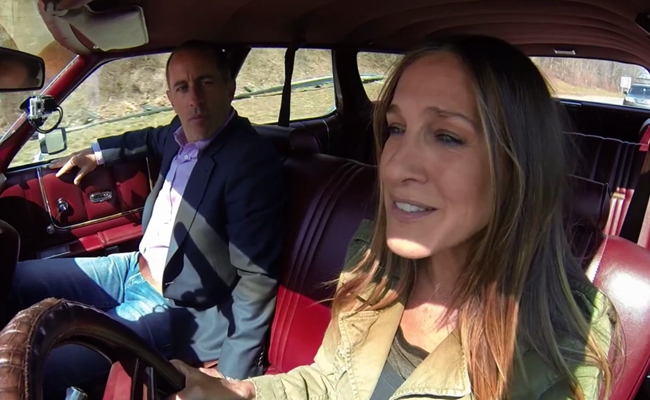 Comedians In Cars Getting Coffee is back. Jerry Seinfeld‘s talky web series has begun its fourth season, with Sex and the City star Sarah Jessica Parker riding along in the debut episode.

In keeping with the show’s formula, Seinfeld picks up Parker in an old car and takes her out for a cup of java. This time, he’s chosen a 1976 Ford Country Squire (which he hates but Parker loves) and a chrome diner out on Long Island. Along the way, he and Parker chat about nostalgia, parenthood, and much more. We even get a Comedians In Cars Getting Coffee theme song, sung by Seinfeld himself.

The new episode is the first of six that will make up Comedians In Cars Getting Coffee‘s current season. Future guests, as indicated in a recent trailer, will include Aziz Ansari and Jon Stewart. Even after season four runs its course, there’s plenty more to come: The series has already been renewed for at least five more seasons by distributor Crackle.

It’s been more than four months since Comedians In Cars’ Getting Coffee‘s last episode, but Jerry Seinfeld’s web series doesn’t seem to have changed very much. At this point, viewers know what they can expect: rambling conversations, humorous product placement for exclusive sponsor Acura, and Seinfeld’s tendency to lean forward against the steering wheel while laughing. This has proved a viable recipe, so why change it? If you’ve enjoyed the show thus far, you’ll still enjoy it now. If not, don’t expect the new season to be noticeably different.