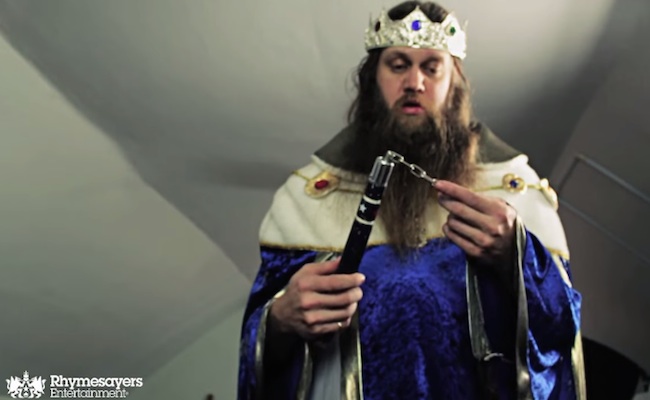 Sometimes you wake up in the morning with the desire to get something done but that thing is slightly unattainable. You then spend the whole day trying to make that thing happen. And when it finally does, the payoff is always worth it. The new Atmosphere video outlines this desire as the search for the perfect pair of nunchucks. At least, that’s what the outlandish new video, “We Ain’t Gonna Die Today” from the legendary hip hop group from Minneapolis would have you believe.

The video features friends and collaborators Bobby Silver and DJ Rare Groove, along with the help from from fellow artist Blueprint behind the camera directing all the action. In the “payoff” scene at the end of the clip we learn that all it takes to find the perfect pair of traditional Okinawan martial arts weapon is a rendezvous with Grove and a personal pizza, which may be an allusion to a certain film featuring amphibians, pizza, and nunchucks.

The tune features a laid back groove with a guitar heavy pace that rhythmically helps to propel the song and video forward. It’s what gives the slow motion visuals depth, pressing the clip in motion as Silver continues on his path to find a pair of those pesky weapons.

This is the third video from Atmosphere’s Southsiders release. The debut from that album, “Kanye West,” is another exceptional video you surely don’t want to miss. It’s a little less light hearted than “We Ain’t Gonna Die Today”, but nonetheless proves Atmosphere loves dropping killer videos to accompany their far above average tunes.

You can check out that clip and more from the group on the Rhymesayers channel. The new album Southsiders is out now so make sure you pick up a copy.