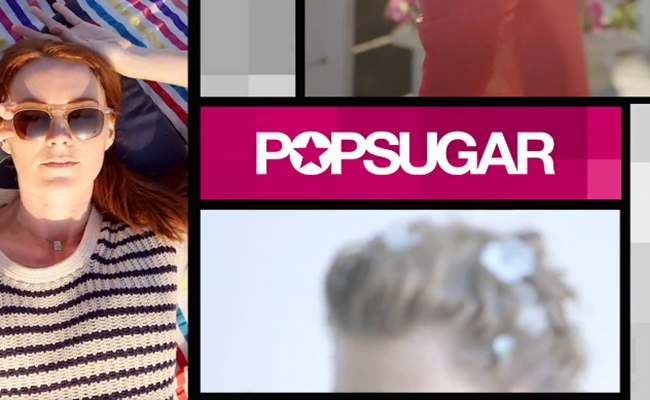 The team at Popsugar claims to “know what women want to watch,” and the network is putting that claim to the test with a new lineup of originals. The media company aimed at women debuted eight new programs at a presentation at Digital Content Newfronts.

Popsugar generally attempts to appeal to stereotypical women, and its upcoming programs–which focus on fashion, beauty, cooking, and celebrity culture–are no exceptions. Perhaps the most exciting new series is Seriously Distracted, a collaboration with Above Average and Popsugar’s first scripted series. Seriously Distracted follows a gaggle of girls who work together and spend their time in the office gossiping about celebrities.

Unsurprisingly, a number of the new programs are anchored by celebrity stars. Gillian Jacobs will get her own fashion show, titled Fetch Fashion, while Katherine Schwarzenegger will explore post-college life in What Now?

“Over the past eight years, we’ve worked hard to build a lifestyle brand that today delights over 23 million women every month who make us part of their daily lives — in the digital space, on mobile and TV,” said Brian Sugar, founder and CEO of Popsugar. “What makes us particularly effective in connecting brands to women is our combination of fresh content, programming expertise, and technology, all at scale with innovative marketing programs.”

Existing content on Popsugar scores 50 million views a month, a testament to the network’s claim to know what women want. Here is a complete list of the new programs Popsugar unveiled at Newfronts:

Seriously Distracted is POPSUGAR’s first scripted project developed through a new partnership with Above Average. This comedy series is about a group of women who find themselves stuck at the bottom rung of a New York PR firm that is always one signing away from making it big. The less-than-intense work pace affords them plenty of time to obsess about what really matters — celebrity gossip. The series is being created by Above Average, who were inspired by their own over-the-top reactions to the “conscious uncoupling” of Gwyneth Paltrow and Chris Martin. Expect cameo appearances from celebrities as the Seriously PR firm attempts to sign new clients.

#FullDisclosure is a humorous, honest, and sexy look at the world of modern relationships for millennials. #FullDisclosure will be a segment-driven, weekly talk show that delves into all things sex and relationships — on and off the web. The show is currently casting for a panel of three hosts who are smart, funny, and on-demo. Each episode will explore a relationship theme and feature noted guest panelists who are experts relevant to that theme, such as a sexpert, a matchmaker, or a young celebrity who wants to join the fun. Shot in front of a studio audience and using the interactivity available on the POPSUGAR platform, #FullDisclosure will have an intriguing, social-media-driven, talk-show format with a late-night feel.

#FullDisclosure is being produced through the CORE Media Group partnership. As the company behind American Idol and So You Think You Can Dance, CORE Media Group is one of the most respected television production entities in the business.

WHAT NOW? WITH KATHERINE SCHWARZENEGGER

Author, blogger, and rising star, TV personality Katherine Schwarzenegger tackles the tough topics of your 20s: that point in your life when you throw up your hands and say, “Now what?” In each episode, Schwarzenegger has intimate, frank, and often surprising conversations with celebrities, leaders, and influencers, as we learn how they found success by navigating pivotal moments in their lives. This series is inspired by her newly released book, I Just Graduated…Now What?: Honest Advice For Navigating What Comes Next, featuring interviews with John Legend, Andy Cohen, Lauren Bush, Eva Longoria, and others.

Join the never-ending party around entrepreneurs Juliet Boydstun and Lucinda Lent, who run The Coop, a wildly successful Los Angeles-based party space and party planning service started by moms for moms. Propelled by an appearance on the hit ABC show Shark Tank, The Coop has quickly become the go-to service for L.A.’s celebrity parents.

L.A. moms have high expectations, and in each episode, Juliet and Lucinda manage to deliver memorable kids’ parties with their unique decoration designs and creative activities. Produced in partnership with CORE Media Group, the series is the perfect offering from POPSUGAR in the mom space, with its signature combination of entertainment and actionable “how-to” information. Along with the drama and excitement of planning a great party under often challenging conditions, Juliet and Lucinda will invite viewers into their workshop and always offer takeaways on how to create your kids’ very own Best Birthday Ever.

Marking the 10th anniversary of Mean Girls, POPSUGAR is finally going to make “fetch” happen! You already know talented actress Gillian Jacobs from NBC’s Community, and if you follow her on Instagram, you’ve also met her charismatic dog Mick. What you might not know is that both Gillian and Mick are huge fashion fans! This unique series will feature Gillian and her dog sporting the perfect designer outfits while interviewing rad designers and introducing us to up-and-coming lines in this warm and comedic format. Fetch Fashion is a fashion show like you’ve never seen before: warm, funny, and shareable.

From Lisa Erspamer, president of Unleashed Media, former co-executive producer of The Oprah Winfrey Show and chief creative officer of OWN, Five Things was inspired by her book project, A Letter to My Mom, which honors the powerful, loving, complicated, one-of-a-kind relationships we all have with our mothers. In the show, the tables are turned when celebrities become the interviewers, asking their beloved moms their most burning questions they’ve never before broached. Each episode will be centered on a celebrity who is asking their mom the five questions. At the end, they will surprise their mom by reading a personally crafted, heartfelt letter written just for them. The series is sure to be emotional, uplifting, and unexpected.

POPSUGAR is launching a new series of long-form (30-60 minutes), TV-quality specials. These specials will be added to our current specials lineup that includes our annual Live Holiday Gift Guide, which trended number one on Twitter during its broadcast; our Award Season Live Viewing Parties; and our annual POPSUGAR Beauty Awards. The new specials will dive deeper into trends, personalities, must haves, and tips on our most popular topics, including Fitness, Fashion and Beauty, Wedding Workbooks, Home Entertaining, and more to be announced. We will also have live specials around events of high interest to our audience, from movie premieres to favorite TV show season finales and more.

POPSUGAR will be creating year-round digital content through a new partnership with Life is Beautiful, the fast-growing, Las Vegas-based culture-fest celebrating the convergence of music, food, art, and learning. Last year, huge crowds flocked to Las Vegas to see acts like Imagine Dragons and The Killers. Through its partnership, POPSUGAR and Life is Beautiful will create a new media brand, offering video content that features exclusive, inspiring stories from the influencers and tastemakers who are contributing to the Life is Beautiful project. The festival features over 75 musical acts, 60 well-known chefs and restaurants, 25 world-renowned artists, 25 noted speakers, and special performances by Cirque du Soleil, over 15 city blocks. Life is Beautiful is dedicated to helping people conquer their fears, chase their dreams, and see that life is truly beautiful.