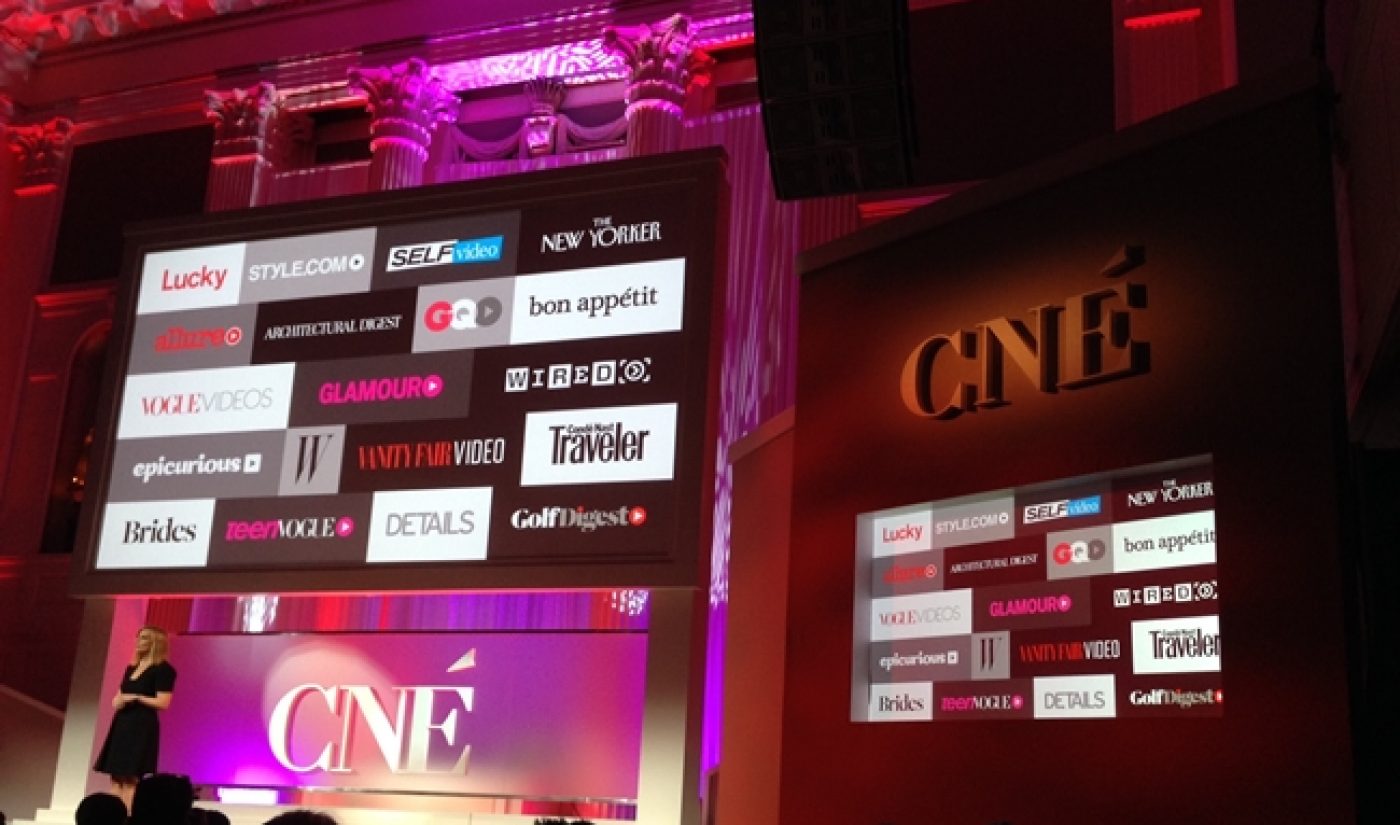 A few months before last year’s Digital Content Newfronts, Conde Nast began the push its magazine brands onto YouTube, with GQ and Glamour serving as the first two properties to gain channels of their own. One year later, Conde Nast has announced the “second phase” of its digital expansion, which will include several new channels and a new curation platform.

At its 2014 Newfronts presentation, Conde Nast announced three more YouTube hubs based off its magazines. A Bon Appétit channel will join existing food destinations like Epicurious, The New Yorker will bring its distinct brand of literary culture to YouTube, and Lucky will make offer a new slate of content for shopaholics.

“In just one year, CNÉ has set the industry standard for award-winning original video content that millions of influential millennials are watching and sharing,” said Conde Nast President Dawn Ostroff. “The addition of The Scene, which will feature content from all of our powerful branded channels and premium digital videos from leading traditional and digital media companies, will increase our reach to entirely new audiences.”

The last part of Conde Nast’s expansion is a full lineup of original programs across its channels. Here are short descriptions for 27 of the network’s new shows:

Cassandra To The Rescue – YouTube sensation Cassandra Bankson helps women tackle their insecurities and skin problems with makeup secrets and lessons in confidence.

Beauty Evolution – Top beauty insiders reveal the best moments – and not-so-best moments – of the most glamorous celebs on their journeys to becoming beauty icons.

I Effed It Up – Bon Appétit’s senior food editor, Dawn Perry, shares cooking techniques that will keep viewers from messing up their favorite dishes.

Cook Like A Pro – The country’s best chefs reveal the secrets to their most famous dishes.

Big Fat Weekend – Bon Appétit’s inimitable Andrew Knowlton bursts onto the scene of a new town in each episode and revels in the local food, drink and culinary indulgences.

1 Item 3 Ways – Viewers will learn how to take the seasonal food item of the moment and reinvent it in three unique and delicious recipes.

What’s In Your Bag? – Comedian Mike Kenton plays the most comically intrusive and revealing game with the residents of New York City – what’s in their grocery bags.

Epicuriousity – This visually lush and compelling docu-series explores the trends and personalities at the forefront of the artisanal food and wine movement in America.

30 Things – From executive producers Kelly Ripa and Mark Consuelos, this series presents the must-haves and must-knows for women on the cusp of, and beyond, the age of 30.

Glamour Documentaries – The next installment in the award-winning documentary series that brought viewers Screw You Cancer.

Shanked – Outrageous and hilarious pranks have finally made their way onto the golf course in this new hidden-camera comedy series.

Hungover Caddy – An animated series that follows the antics and shenanigans of an unruly caddy at the fanciest of country clubs.

45 Second Man – GQ’s new animated series demonstrates how to do everything – in style – with invaluable insight and expertise.

Most Expensivest Sh*t – Whether in good taste or totally over the top, this series looks at the most outrageously decadent toys of the rich and famous – the most expensivest sh*t known to man.

Rachel’s Rules – Nutrition expert Rachel Beller dissects the shocking reality behind the foods people think are healthy, and how to truly eat smart.

Treat Yourself – This series shows viewers how to enjoy a delicious indulgence without going up in jean size – the ultimate treat for every healthy food lover.

In The Mood For – With her unrivaled style sensibility and hilarious irreverence, fashion blogger Leandra Medine (aka Man Repeller) demonstrates how to wear the hottest looks of the moment.

Bryanboy Goes To College – On a cross-country college tour, popular fashion blogger Bryanboy meets chic and stylish college students in this series that celebrates street style at the top of its class.

Strictly Ballet – This series presents an unprecedented, never-before-seen look inside the School of American Ballet at Lincoln Center.

Get The Look – Teen Vogue‘s Elaine Welteroth gives viewers the scoop on their favorite celebrities’ most iconic makeup moments straight from the source – speaking with their very own makeup artists who demonstrate how to achieve each look.

@VF Scandal – No one does scandal quite like Vanity Fair; this documentary series reveals the most salacious, scandalous and intriguing tales that exist, proving that when it comes to storytelling, it’s either Vanity Fair or it’s not.

Red Carpet Conversations – Red carpet footage like you’ve never seen it before – with irreverent lip reading that suggests a conversation between celebrities that you would never imagine.

73 Questions – From director Joe Sabia comes a totally unique interview that takes us inside a celebrity’s home, where they’ll answer 73 very personal questions – on the spot.

Born Free – This gripping documentary series brings together top fashion designers with iconic photographer Annie Leibovitz as they embark on a quest to minimize the spread of HIV to children from infected mothers.

Retro Grade – A gadget lab for antiquated and obsolete technology, this comic series offers tech demonstrations that viewers won’t believe were once possible.

Teen Technorati – Hundreds of thousands of dollars and a Thiel Fellowship await a select few teen inventors who are competing for the chance to develop their inventions.