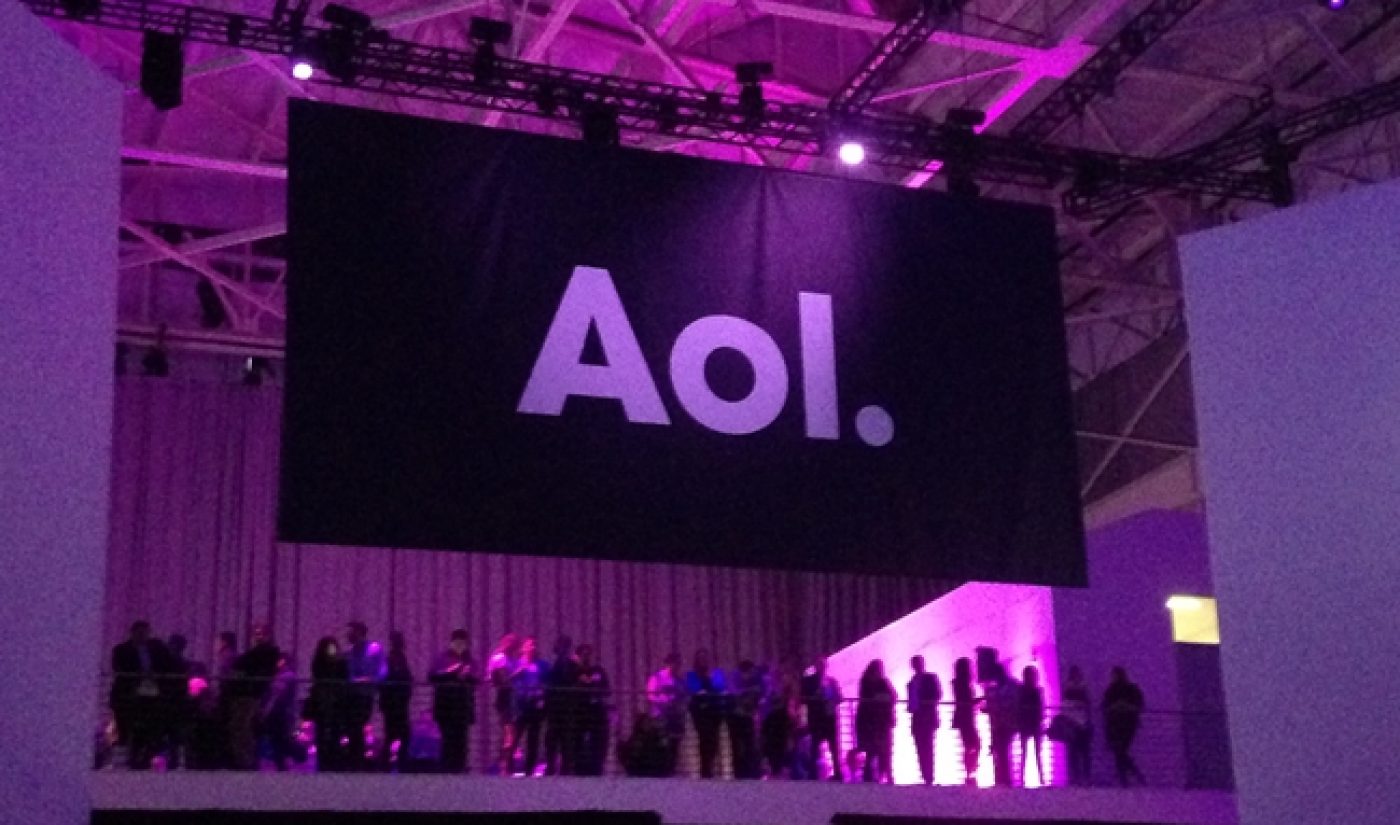 Three weeks after renewing four original series for second seasons, AOL has added to its library by debuting 12 new offerings. During its presentation at Digital Content Newfronts, AOL introduced its series one by one, with most of them accompanied by a well-known producer, director, or star.

Perhaps the biggest name involved in AOL’s new content slate is James Franco. The actor and experimental filmmaker will mash-up famous movie scenes as part of a series called Making A Scene. Other celebrities joining Franco on AOL include Kevin Nealon, Zoe Saldana, and Steve Buscemi (whose Park Bench series was revealed four weeks before the Newfronts presentation).

AOL will also house one of the first projects from NewForm, a new digital studio created by Ron Howard and Brian Grazer. The two Hollywood heavyweights will collaborate for Inspired, in which celebrities will look back on moments that encouraged them to persevere beyond obstacles in their respective paths.

The 16 series included in AOL’s lineup total one more than the lineup it rolled out at last year’s Newfronts presentation. Of that group, less than a third were renewed, with iJustine’s Hardwired and Nicole Richie’s #CandidlyNicole among the select few to get re-upped.

“This year’s slate continues to define AOL Originals as a premium showcase for authentic voices telling remarkable stories,” said Gabriel Lewis, head of AOL Originals. “We have a unique opportunity to produce and program a diverse range of content for the various audiences the AOL On Network reaches, and we’ve taken advantage of that opportunity.”

The other news item discussed at AOL’s presentation was the company’s plan to offer full Nielsen ratings on all its web programs. These TV-like metrics will help attract advertisers, and AOL hopes that its broad range of celebrity-driven content can seal the deal.

Here is a full list of AOL’s original series lineup:

“MAKING A SCENE WITH JAMES FRANCO” – Born out of Franco’s love for movies, each episode will feature James and one or more fellow artists discussing their favorite, classic scenes from Hollywood cinema. Then they will put their own stamp on history by recreating these scenes with an irreverent twist. Produced by Rabbit Bandini Productions and Trium Entertainment.

“KEVIN NEALON’S LAUGH LESSONS” – Comedy is hard, but teaching comedy to children is hilariously difficult. Kevin Nealon is giving the challenge to some world-famous comedians in this new AOL series.

As these young minds meet with comedy’s best, get ready to learn some valuable comedy lessons, and to laugh! If you thought kids say the darndest things, wait until you hear what these comedians have to say. Executive producers Ellen DeGeneres, Kevin Nealon, Jeff Kleeman Ed Glavin, Andy Lassner, Mary Connelly for Telepictures.

“INSPIRED” features A-list celebrities, visionaries and some of the biggest newsmakers of our generation, recounting the stories behind their most life-changing moments of inspiration.  Original photos and archival footage will bring these moments to life along with in-depth interviews.  Executive produced by Rick Solomon and brought to you by NewForm, a new digital studio formed in partnership with Discovery Communications, Brian Grazer, Ron Howard, Craig Jacobson, Ed Wilson, Jim Wiatt, Michael Rosenberg.

“MY HERO” – Executive produced by Zoe Saldana (who will star in one of the episodes), is an uplifting show featuring celebrities paying a surprise tribute to one person who changed their life by giving them an over-the-top, heart-felt surprise.  Produced by Ellen Rakieten Entertainment a division of Relativity Media and Cinestar Productions.

“WIN/WIN” – The biggest names in business join a famous athlete for a day of honest conversation, legitimate fun and surprising insights.  Win/Win will provide unprecedented access into the minds of the world’s most-celebrated entrepreneurs and athletes in a compelling, fly-on-the-wall style that will offer fans a fascinating view of what life is really like at the summit of these two increasingly-intertwined worlds. With a mix of candid discussions and story-telling expertise, Win/Win will be the ultimate window on the personalities who define today’s sports and business landscapes. Executive Producers Mike Tollin and Jon Weinbach for Mandalay Sports Media.

“THAT’S RACIST” – Jews and Money. Asian Drivers. Polish IQ. CPT… that’s racist! But where do these stereotypes come from? Actor and comedian Mike Epps explores the backstories of this humor and how history and fact often distorts into a snide – but sometimes funny – shorthand.  Produced by Andrew Fried for Boardwalk Pictures.

“SO MUCH MORE” – Punk rock singer Tom Gabel of Against Me! made news in 2012 when she came out as a transgender woman – but what was more remarkable was the overwhelming support the music community gave her as she made her transition to Laura Jane Grace. This is her story – and the story of other members of the trans community whose experiences are woefully underrepresented and misunderstood in the media.  Produced by AOL Studios.

“FOLLOW ME” documents the lives of modern day digital creators that are redefining the definition of celebrity. Each episode features a different star allowing us unprecedented access into their life to share their story. We’ll experience life when the vlogging, instagramming, and tweeting stops… If it ever does. Produced by Fullscreen, the first media company for the connected generation.

“THE ROAD TO DISRUPT” – A twelve episode documentary series following five startup companies competing in the 2013 San Francisco TechCrunch Disrupt Startup Battlefield as they fine tune their products and eventually present in front of a panel of judges in hopes of winning $50,000 in funding. Produced by AOL Studios.

“IN SHORT” – Launched yesterday on AOL, this five episode series from Academy Award-winning producer Christine Vachon and JIRO DREAMS OF SUSHI producer Kevin Iwashina features a talented group of actors including Katie Holmes (MISS MEADOWS), Jeff Garlin (THE GOLDBERGS), Alia Shawkat (ARRESTED DEVELOPMENT), James Purefoy (THE FOLLOWING) and Judy Greer (THE DESCENDANTS) as they step behind the camera to create their own short-form documentaries. Each episode is seen through the eyes of a different actor as they take a seat in the director’s chair for an in-depth look at the cultural ideas, inspirations and influences most important to them. The series is produced by Killer Digital, the digital platform production company launched by award-winning producer, author and founder/partner of Killer Films Christine Vachon and Preferred Content co-founder/Managing Partner Kevin Iwashina.

“CONNECTED” [long-form] – AOL’s first long-form video series chronicles the lives of five seemingly disconnected New Yorkers as they explore the concept of family in New York City. As five parallel stories unfold and eventually come together in a cohesive storyline, viewers are reminded of the universal bond that family has on individuals and on society as a whole — regardless of social status, income, gender, marital status or sexual orientation. Produced by Koda Communications in association with Warrior Poets.

“PARK BENCH” – Steve Buscemi and AOL have teamed-up to take over the streets of New York in this new original series – a local’s take on the special people, places and spirit of The Big Apple. Through unscripted moments and conversations with average New Yorkers – as well as Steve’s celebrity friends – Buscemi takes viewers on a first-hand misadventure. Discussing everything from pop culture to current events, the show will convey Steve’s relationship with New York and its array of one-of-a-kind characters – taking viewers beyond mere interviews and involving them in his daily life. Produced by Olive Productions and RadicalMedia.

“#CANDIDLYNICOLE” – Fashion icon, creative director of House of Harlow 1960 and Winter Kate, and mom Nicole Richie brings her unfiltered sense of humor and unique perspective on life in a series based on her clever Twitter feed. “#CANDIDLYNICOLE” follows the outspoken host’s daily insights as she shares her uncensored perspective on style, parenting, relationships and her journey through life. The series is produced by Telepictures and World of Wonder, with executive producers Nicole Richie and Michael Baum. Fenton Bailey, Randy Barbato & Tom Campbell serve as executive producers for World of Wonder.

“CITY.BALLET.”– Return to the intimate and exciting world of the New York City Ballet, where executive producer Sarah Jessica Parker takes a closer look at the compelling lives of the company members; their hopes, their dreams, their passion and their hardships, both on stage and off. Produced by Pretty Matches Productions and Zero Point Zero Production, the series is sponsored by Citi.

“THE FUTURE STARTS HERE” by @tiffanyshlain” – Groundbreaking filmmaker and founder of the Webby Awards Tiffany Shlain takes us on a wildly entertaining and inspiring ride, exploring what it means to be human in our increasingly connected world. From the latest neuroscience on dreaming to the evolution of social media to new perspectives on creativity, Shlain uses her award-winning style of fast-paced images, colorful animations, and daring and funny insights to encourage us all to think about where we¹re headed. The series is sponsored by Verizon.

“HARDWIRED 2.0” – Digital influencer Justine Ezarik (iJustine) is back. After covering the world of wearable tech last season, iJustine is expanding her coverage this year by profiling the hottest tech trends across the country. The show’s second season topics will range from gaming to beauty tech and will showcase iJustine’s trademark fun personality while featuring the latest trending topics. The series is sponsored by Verizon.