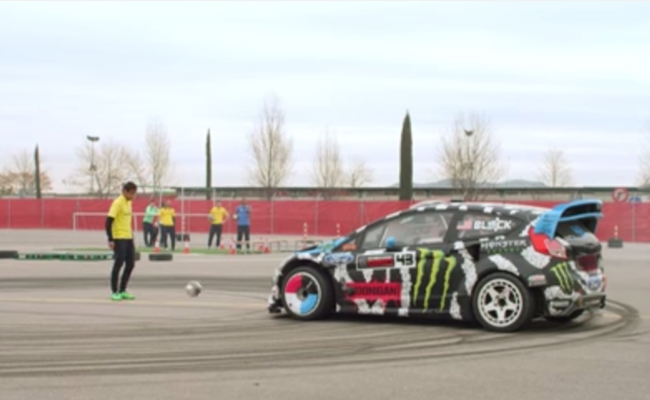 What do you get when you cross drift racing with soccer? The answer is “Footkhana“, a new sport featured in a branded video starring DC Shoes founder Ken Block and Brazilian footballer Neymar.

The Footkhana video pits Block against Neymar in a game of soccer, one in which Neymar dribbles at his feet and Block slamms his car into a soccer ball to make it fly into the net. You would think Block would have a significant advantage, since he can run over the opposition if they get in his way. Nonetheless, the video ends as soccer matches often do–in a draw.

The video has already generated nearly two million views, and if the success of previous Gymkhana episodes is any indicator, it will soon score many more of them.

‘Footkhana’ is hosted by motor oil company Castrol, continuing the extension of the Gymkhana series beyond the DC Shoes channel. After releasing new Gymkhana videos at a rate of about one a year, Block used his spectacular drifting skills to advertise a Need for Speed video game in 2013. Since Gymkhana videos regularly draw tens of millions of views, Castrol likely paid Block handsomely for his services, although if you can afford one of the most popular footballers in the world, you can afford Ken Block, too.