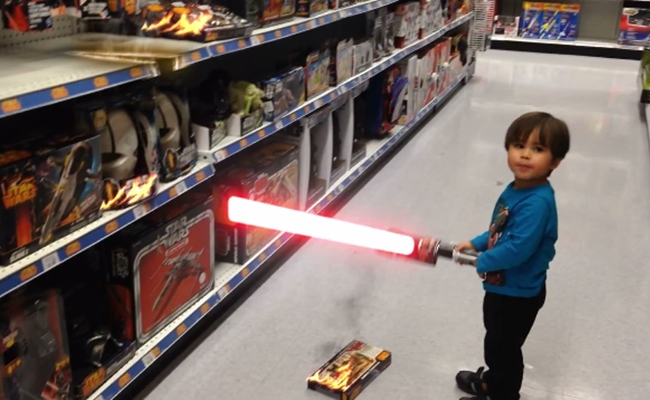 The 3 Year-Old ‘Action Movie Kid’ Is A Superhero Toddler

Daniel Hashimoto is shaping his 3 year-old son James into one of YouTube’s favorite action heroes. Hashimoto is the special effects wizard behind Action Movie Kid, a YouTube channel that stars James as a toddler superhero.

Hashimoto, who works as an animator for DreamWorks, posted the first Action Movie Kid video on February 18th, 2014. In his debut, James sits frozen on the couch while the camera zooms around him, with Matrix-style lines of code disrupting the picture. Since then, Hashimoto has churned out fourteen more episodes, none longer than 16 seconds. Since he became the Action Movie Kid, James has emulated heroes like Luke Skywalker, Tony Stark, and, most recently, Batman.

For anyone worried about Hashimoto exploiting his son in the name of YouTube glory, take note that James seems to be very excited about his role as the Action Movie Kid.  “Upon viewing the lightsaber and Iron Man videos,” Hashimoto told Vice, “My son replied, ‘What if I did that for real-sies, Dad?'”

Just a month after his debut, the Action Movie Kid has already joined Maximus Thor and the Convos With My 2-Year-Old kid as one of YouTube’s favorite toddlers. I look forward to seeing which action movie world James heads to next, so long as he doesn’t fall into the lava before releasing his next video.