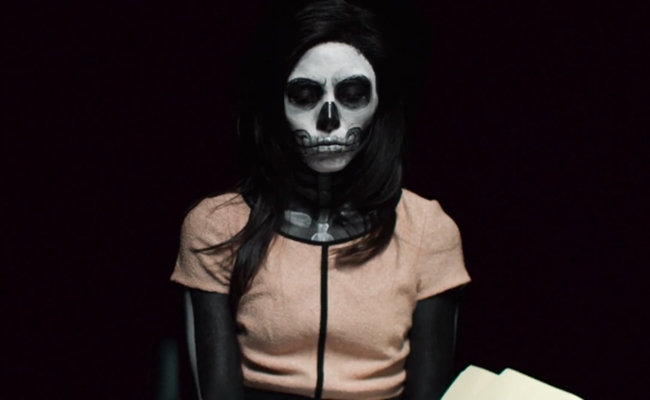 Nearly two months after bringing us her first YouTube short film, Anna Akana has introduced us to Afflicted Inc. The actress/director/vlogger/generally talented person has released her second short, which tackles the subject of anorexia.

Afflicted Inc. takes place in a dark room where a group of “illnesses” meet to discuss how they can best afflict young women. The central character is the avatar of Anorexia, who Akana portrays while made up to look like a Dia de los Muertos skeleton.

Afflicted Inc. has plenty in common with Hallucination, Akana’s first short film. In addition to taking on specific mental illnesses as their subject, they both feature a pair of female leads and generally moody cinematography courtesy of online video vet Lan Bui (who also DP’d Hallucination).

If these similarities point to Akana’s style, she’s getting better at what she does. When compared to Hallucination, Afflicted Inc. is more evocative, conveys a subtler message, and shows Akana’s growth as a filmmaker. She’s apparently going to release ten more shorts before the year is up, and after watching her sophomore effort, I’m excited to see the rest.