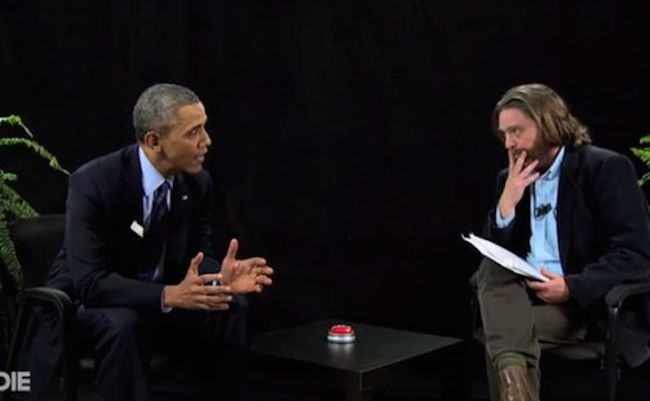 Obama Defends Funny Or Die Appearance, Promotes It On The Radio

President Obama’s appearance in early March 2014 on Funny or Die’s Between Two Ferns with Zach Galifianakis accomplished two things. One, it helped push Americans to Healthcare.gov in statistically significant numbers. And two, it drew the ire of conventionally conservative news programs with critiques of unpresidential behavior.

Stephen Colbert has a rather comprehensive clip showcasing the on-air criticisms POTUS received from a number of different FOX news reporters, anchors, and hosts after his online video publicity stunt. The critique that resonated most with the press came from Bill O’Reilly, who expressed his opinion that Abraham Lincoln wouldn’t have been part of what he believes to have been a disrespectful shill. Here’s the segment from Colbert Report:

O’Reilly’s critique resonated with Obama, too. The President of the United States defended his nontraditional media appearance on the web series during another non traditional media appearance on a morning radio segment last week on ESPN’s The Herd With Colin Cowherd. Cowherd asked Obama specifically about the Fox news icon’s Lincoln statement, to which the president responded with the following:

First of all, if you read back on Lincoln, he loved telling the occasional bawdy joke and being out among regular folks. And one of the hardest things about being president is being in this bubble that is artificial and unless you make a conscious effort, you start sounding like some Washington stiff. So you’ve got to consciously try to get out of that if you want to remind yourself of the wonderful people that you are supposed to be serving who have a sense of humor and aren’t thinking every day about position papers.

After defending his appearance, the President went on another radio show to promote it. The day after Cowerd, Obama called into Ryan Seacrest’s radio program to inform more Americans about the healthcare options available to them at Healthcare.gov by talking to Seacrest on air about his time with Galifianakis. “Zach actually was pretty nervous,” Obama revealed. “I think he was looking around seeing all these Secret Service guys with guns and thinking, ‘I wonder what happens here if I cross a line?’”