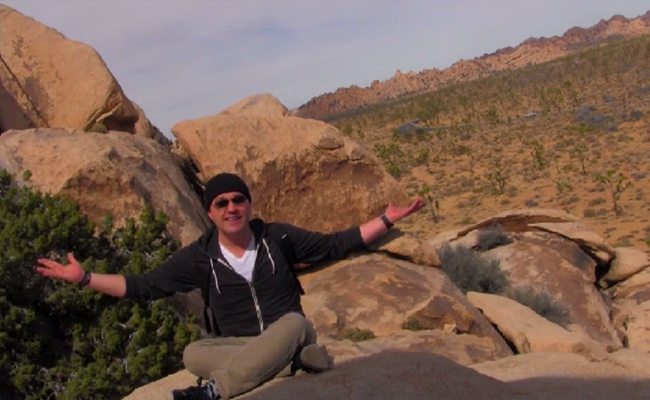 BlackBoxTV has returned for a fifth series of horror and sci-fi shorts, and its first offering of the new season takes on a topic with which many YouTubers can sympathize. The episode, titled “How to quit YouTube“, follows a down-on-his-luck vlogger whose life is dictated by his viewers.

The episode is directed by BlackBoxTV founder Tony Valenzuela and stars Wilson Cleveland (the creator of web series like Leap Year and The Temp Life) as a YouTube vlogger who clings to a dream of stardom despite possessing only a few thousand subscribers. With such a small audience, Cleveland is beholden to the few fans he has, and he lets them dictate his life–even when it means a remote “Travel Tuesday” at Joshua Tree.

The episode is particularly relevant given recent comments from YouTube personalities like Emily Graslie and Boogie2988 about the damaging effect of verbally abusive commenters. Both of those creators talked about how hard it is to deal with trolls day in and day out with no break, a dynamic that inspired Cleveland:

“In the original version, my character was a photographer who goes camping in the woods to get some ‘me time’ after his longtime boyfriend breaks up with him. It was a story about co-dependence from the giver’s point of view – the solitude and loneliness of realizing the sacrifices you’ve made to sustain a relationship you ultimately couldn’t save. In a dramatized, tangential way it reminded me of some YouTube creator/audience relationships.”

“How to quit YouTube” thus serves as an extreme version of the occasionally overwhelming demands of online video fame. “I’m also fascinated by the audience’s influence on some creators and what they’re willing to do because it’s what the audience wants to see,” added Cleveland.

Of course, since this is BlackBoxTV, “How to quit YouTube” ends up in a very creepy place. In addition to informing its viewers about a darker side of online fandoms, it reasserts its host channel as a go-to source for horror programming on YouTube.