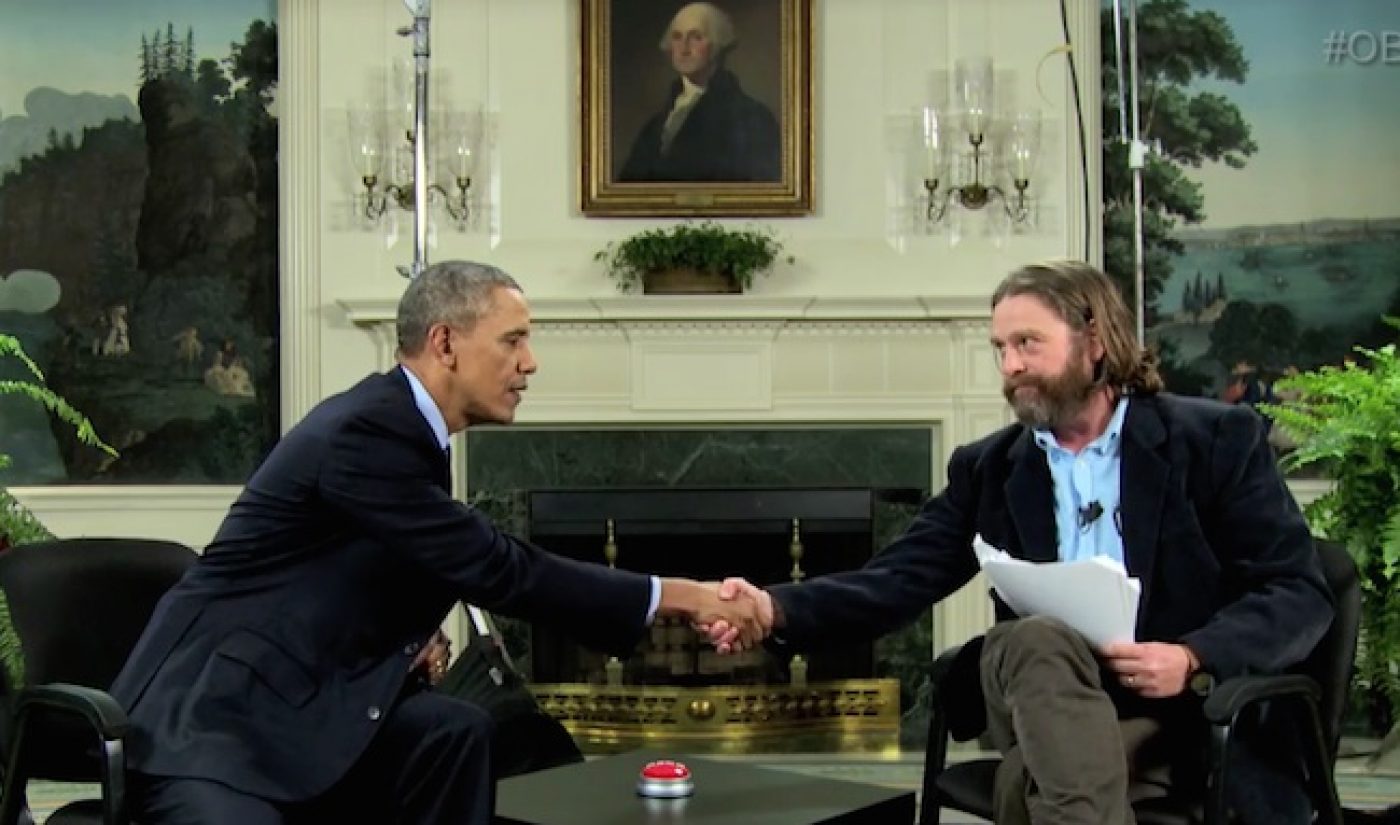 So President Barack Obama’s appearance on Between Two Ferns with Zach Galifianakis on Funny or Die seems to have worked.

POTUS was on the program to not only trade insults with the Hangover star, but turn the young kids these days onto the healthcare options available at Healthcare.gov. Senior Communications Advisor to the White House Tara McGuinness tweeted earlier on Tuesday that a decent chunk of the individuals who have now viewed the video more than 7.9 million times since its release at 10:30AM ET on March 11, 2014 have clicked over to the website set up by the Affordable Care Act.

What site used to be the top referrer to HealthCare.gov and what the referrals from FunnyOrDie.com equate to in terms of actual visits is not clear, but what is clear is that the White House is very happy with the numbers so far.

“I think what it says is gone are the days when your broadcasts or your broadcasts or yours can reach everybody we need to reach,” White House Press Secretary Jay Carney told reporters on Tuesday. “We’re involved in a multifaceted effort to reach communities out there, folks who can benefit from quality affordable health insurance, who can avail themselves of the options they can find on healthcare.gov, and we are looking for creative ways to do that. This is one of them.”

Hey @galifianakisz, thanks for sending so many folks to #GetCoveredNow at http://t.co/5zeR2RQuXe. And good luck with those spider bites. -bo

The video was a result of a meeting between Hollywood actors, musicians, writers, and producers and Obama in July 2013. Jennifer Hudson and Funny or Die President of Production and Between Two Ferns Executive Producer Mike Farah were two of the individuals in attendance. After the Hollywood advisors left the White House, Hudson collaborated with Farah and his team for a Scandal spoof that promoted Obamacare on the eve of its website’s initial rollout.

The Hudson video was just the start of what Farah now describes as “a great working relationship with the White House.” The Funny or Die executive met with senior Obama advisor Valerie Jarrett while she was visiting Los Angeles in September 2013 and brought up the idea of getting the President to sit down with Galifianakis. Five months later, in February 2014, Farah, Galifianakis, and crew were at the White House to film the installment.

Of course, not everyone is happy with Obama’s appearance on Funny or Die and to see him exchange potshots on a program that’s sometimes salacious and oftentimes crass.

The headline from Fox News’ coverage of the video reads “White House defends Obama’s snarky interview with Zach Galifianakis”, while the appearance prompted Jim Geraghty at National Review to write, “Getting the president to pop up in every conceivable entertainment context is a deliberate strategy by this White House. It is an awful development, and the next president has to at least try to put this genie back in the bottle.”

Even if Geraghty is right and this is an “awful development”, if Obama’s appearance on Between Two Ferns helps him reach his goal of 6 million signups under the Affordable Care Act by March 31 in any meaningful way, few future presidents will try to put the genie back into any bottle that isn’t tied to popular culture entities with actionable audiences.