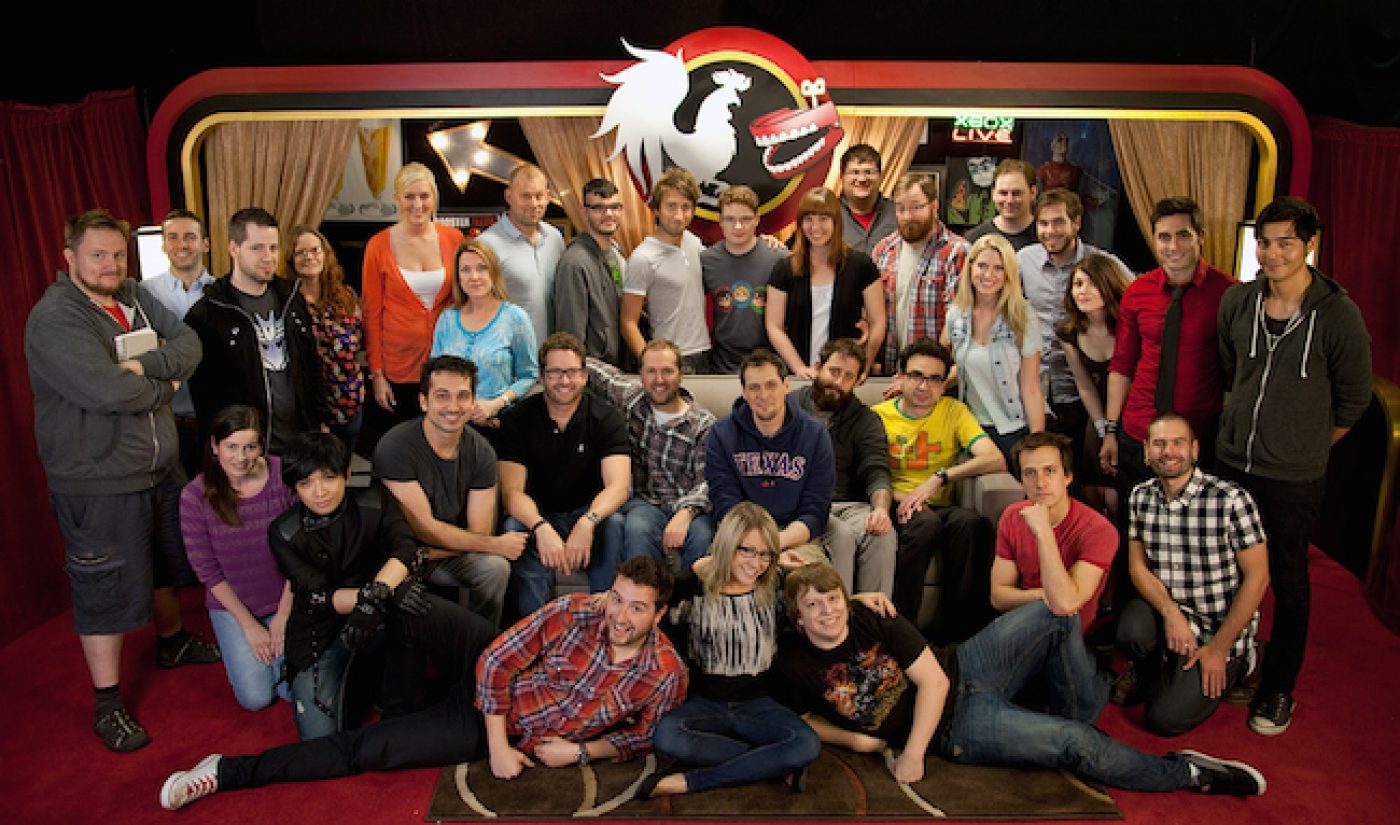 Austin, Texas-based Rooster Teeth has been an iconic online video entity since it was founded way back in 2003. In the past decade-plus, the creators of such internet sensations as Red vs. Blue and RWBY have consistently ranked among the Top 100 Most Viewed Channels on YouTube (with an aggregate total of over 2.8 billion views on the platform), founded a popular and quickly growing gaming-oriented convention, and shown emerging creators how to build a business on and off YouTube by doing what you love.

What can we learn from Rooster Teeth’s success? Quite a bit. Tubefiter had the opportunity to catch up with Rooster Teeth CEO Matt Hullum and Rooster Teeth Co-Founder Gus Sorola and ask a few questions about their history, their company’s strategy, and what’s in store for Rooster Teeth in the future.

Tubefilter:  If you had to write an equation for success on and off YouTube, what would it be?

Gus Sorola: From the beginning we have always maintained and promoted our own community site, since before YouTube even existed.  Building community is key to having an engaged, active audience who really enjoy your content. No matter what happens on other websites we will always maintain our own platform for distribution. That means that no matter what other sites go out of business, or change their commenting system, we will continue to be in control of the experience viewers have at our own site.

The next extension beyond maintaining the community site is actually meeting our fans and viewers face to face in the physical space. The desire to meet our viewers face to face compelled us to begin attending and running events. Being able to put faces to screen names makes comments and feedback on the internet much more real and helps build viewers into evangelists who can act as a street team promoting what we do to their friends.

TF: When you consider launching new shows (RWBY) or channels (LetsPlay), what factors do you consider before moving forward? Matt Hullum: There are a few questions we always ask ourselves before starting a new project:

Is this something we want to do? If not, life’s too short, and as creators we don’t want to produce content we’re not invested in. Our audience doesn’t want that either.

Is this something that our current audience will want to see, and could it bring in a new audience as well? We enjoy giving our fans more of what they want to see, but we’re also excited about finding new viewers. RWBY is a great example of meeting both objectives at the same time. Our current audience loves it, and we’ve had amazing response from new fans around the world. The soundtrack even hit #1 on the iTunes charts in Japan. That’s a new market for us.

How do we distribute it? Not every piece of content we make is going to make sense on every platform we have access to. Our first priority is always to find ways to extend benefits for our paying subscribers (our premium website members). For instance with our podcasts: we have the #2 comedy and #1 gaming podcast on iTunes, but before we release the audio for download, we offer a live stream of the broadcast to our paying website members. They get to interact with us in real-time and we answer questions and take their suggestions for discussion topics. We have such a huge array of distribution options, I think it’s important to treat each project as unique and tailor the release around the content.

Do we have the resources and ability to produce it? We don’t want to do a bad job on something if we’re short on bandwidth or it is something that is outside of our current level of expertise, but we do try to push ourselves to do bigger and more ambitious projects every year. We’ve got some very big plans for 2014 and we are ready to tackle some exciting new projects, things we’ve never done before but that our audience has been dying to see. We’re not going to disappoint them.

TF: What were some of the challenges you’ve faced?

We want to make sure that our content and our community always come first. That can be tricky when you are running a bustling online store, a massive social web site, managing live events and working with a multitude of different partners from game developers to toy manufacturers to national retailers. The entire company meets every Monday and we all talk about what’s going on. I want everyone to know where we are headed, and to remember that our focus on making awesome content is what is going to get us there.

TF: How has being based in Austin been helpful or hurtful? Do you think it’s made a difference?

MH: It’s funny because sometimes you feel like you are not part of the conversation in the industry simply because of location, but then again a lot of those conversations are just noise, or a distraction at the very least. Most of the time, it’s just different groups recycling the same opportunities.

We work with a lot of partners in LA and New York, and we enjoy that process, but we’re not struggling to figure out what we want to do relative to what everyone else is trying to do. We want to work with people that do not limit their mindset simply because of geography.

MH: To produce bigger, bolder and more audacious projects than we ever have before. We want to produce the kind of content that our audience is dying to see, but didn’t expect us to try. We want to continue to set the standard for premium content online and blaze new trails the way we have since we started the company.

TF: If you could give one piece of advice to emerging YouTubers, what would it be?

MH: Be consistent, be optimistic, be true to yourself. Make content that you would want to watch. If you work hard at it, chances are you’ll find other people that want to watch it too.