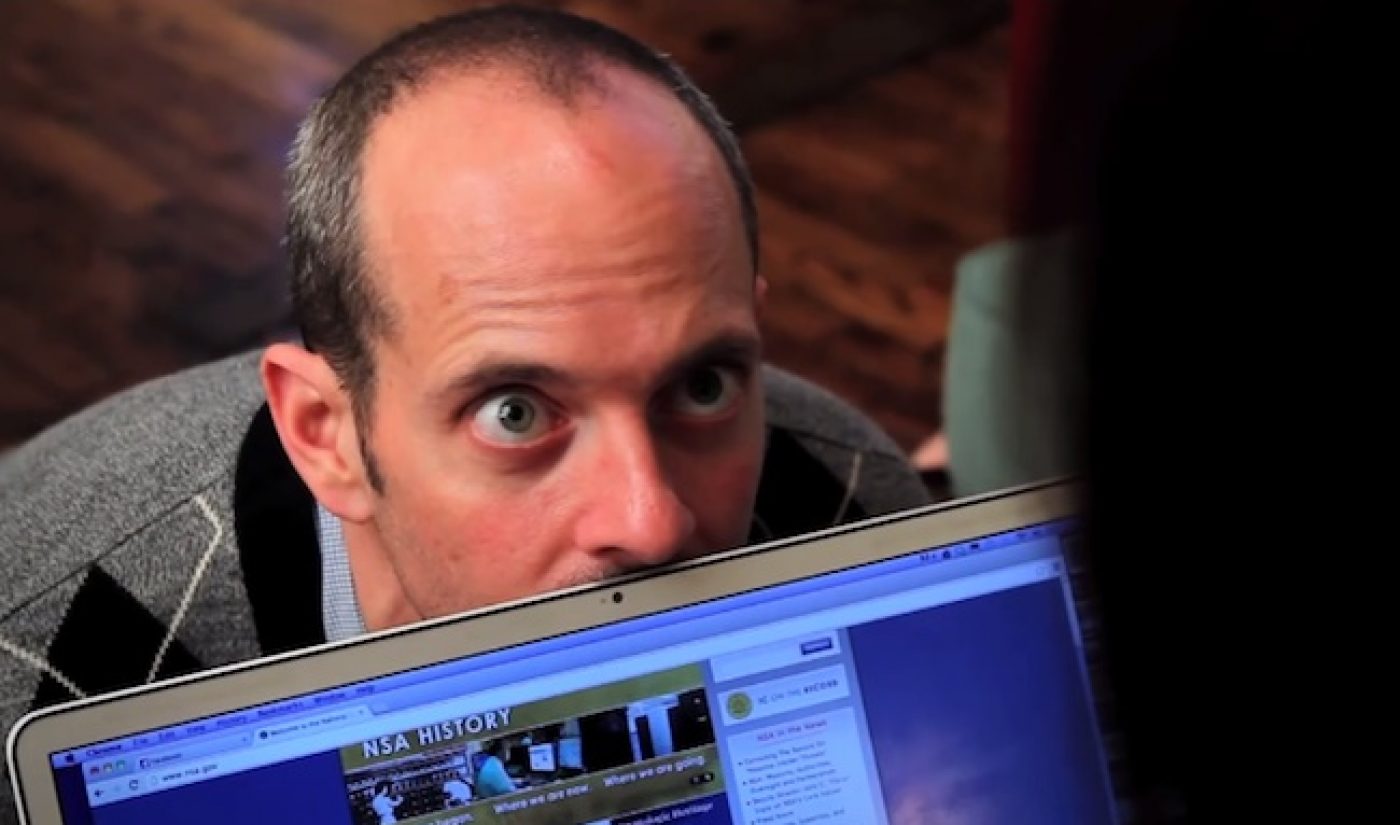 [Editor’s Note: Yuri Baranovsky is the co-owner of Happy Little Guillotine Studios, one of the web’s first and most successful creative agencies and production houses. Baranovsky has been on the front lines of digital production and advertising for the better part of the last decade and has an incredible amount of fantastic thoughts on the industries. Here he is sharing a few of them.]

Every single meeting I have with a brand or ad agency starts with this sentence: “Okay, but we’d really like is to go viral.” Oh, sweet, beautiful, brands – don’t we all?

The problem with “going viral,” other than it sounds like we’re all desperately trying to get the Plague, is that the digital landscape is constantly evolving. The methods by which a video got popular last month might have changed this month, and what worked for one campaign might not work at all for another.

So, the question is, what works now? My company and I decided to do a little experiment to try to find out.

I run Happy Little Guillotine Studios, a creative agency and production house that has created a lot of successful digital campaigns. Everything from 7-Eleven’s Slurpee Unity Tour that got over a billion media impressions to Leap Year, a two season-long scripted Hulu series that garnered over 10 million views. The thing with all of our campaigns is we had either brand dollars to spend on advertising or a PR company that had brand dollars to spend on advertising. That makes things a lot easier.

But, we were curious. Could we organically grow our views fast? Could we conjure up a viral video out of nothing, with no pre-existing YouTube account, no community built around our name and no budget? Could a carefully laid plan create a new method of creating a hit? We wanted to find out. So, here’s what we did.

Basically, we wanted to recreate what any brand wants: an immediate hit.

The idea and the script is everything. So we needed to make that first. It was important for us to uphold the keystones of our company: high-quality footage, sharp writing, good editing, and great acting.

As a production company that very often works in the advertising world, we decided to satirize the thing we know well – commercials. And what day is bigger for commercials than the Super Bowl?

We had our idea: shoot five fake ads under a series we called Rejected Super Bowl Commercials and use the format to do a bit of social satire. So, we had our format, the next bit was what we wanted to lampoon. We wanted to hit topics that we thought were both important and hit on themes that people were passionate about. So, we came up with five commercials:

The ideas created, the scripts written, we needed the very important second piece to the campaign…

If content is king then distribution is its powerful Lady Macbethian wife. If we wanted an immediate hit, we needed a way to expose the videos to a mass audience.

We reached out to SuperbowlCommercials.tv – who have skillfully placed themselves on top of Google when you search for “superbowl commercials.” As I’ve worked with them before, it was a match made in heaven. The agreement was incredibly simple: they feature our videos, we get to keep three of them on our YouTube channel, and they get to host two of them on their own, with annotations leading people back to HLG Studios.

Production we can do. Production is what we love doing.

We gathered some of our favorite actors to work with (Daniela DiIorio, Angela Gulner, John Forest, Danny Jacobs, and the great film and TV actor, Jonathan Slavin) and begged them to spend a weekend with us shooting all day. We shot all five videos in two days – Justin Morrison one of my fellow HLG Studios owners and our DP – lent us his house for most of the videos. And a production company we’re very close to, Vanishing Angle, let us use their awesome office as a set.

It was exhausting but, with great, talented people, we could’ve spent another 20 hours stuck in that apartment. Shooting done.

The Super Bowl is a singular event, so we needed to release the videos in a batch all around Super Sunday.

We released Swiffle on the Tuesday beforehand, as kind of a tease. Lucky for us, it immediately took off, mostly because the unthinkable happened: people thought it was real. It was posted on CBS’s New York affiliate site and BET listed it among the Super Bowl commercials coming that Sunday. It was a very, very bizarre start to the campaign but exactly what we needed.

The next couple of videos (Buzzfeed and Doritos) were released Friday and Saturday, and each did quite well also (34,000 for Buzzfeed, 55,000 for Doritos until Frito Lay made us remove the video and Shmoritos was born).

But it really exploded on the day of the game, when we released the NSA satire and then, on Monday, we released Monsanto. Both were huge hits almost immediately – part of the reason was that the Super Bowl site got the expected amount of traffic (a lot) and their prominent placement of our videos was a huge boon.

After Sunday and Monday’s big numbers (each video went roughly to 50,000 to 60,000 views), both the NSA and Monsanto took a life of their own. They spread – specifically from conspiracy theory site to conspiracy theory site – and Monsanto was even posted on Huffington Post and mentioned by world-leading-conspiracy-theorist-and-inventor-of-lizard-aliens-are-taking-over-the-world… Mr. David Icke himself.

We emailed everyone. Huffington Post (which posted Monsanto), BusinessWeek, Buzzfeed, Tubefilter, you name it, we emailed them. Eventually, UpWorthy was kind enough to post both Swiffle and the NSA videos which really helped with views. But this part of the process was difficult because it felt a bit like we were screaming into a very large hole where our dreams went to die.

That said, the few places that did post us really helped bump up the views, and some amazing profiles like Cynthia Johnson’s case study of us on SocialMediaClub.org were hugely helpful.

After roughly a week, our videos have cumulatively gotten 639,441 views (and growing). Our highest views are on three videos:

And we have a growing, though modest, amount of subscribers at 1,760 To us, going from zero to the above, was a huge success. No, we didn’t break a million. No, we haven’t earned enough money to buy a boat. But, it taught me a very important thing…

“Going viral” is incredibly intimidating. Back in 2006, when I started doing digital video, getting a million views was like walking on water. It was a miracle. A prized, beautiful miracle. Now, hitting a million seems like the expectation, and hitting 15 million is where you’re really talking about making a buzz and penetrating the rest of the online video noise.

But how does one reach those numbers? If you read the articles that have been written since 2006 and continue to be written now, the formula is: create cheap content. Partner with already-popular YouTubers. Do this weekly. Work for 15-20 years. Grow your fanbase. Reap the benefits of fame.

Does it work? Sure. For some people. Hell, a lot of people have successfully made millions on their YouTube channels and I have nothing but total admiration for them. But the problem, the risk is that it can also become a sweatshop of art where you’re constantly working and everything – both quality and content — suffers because you’ve just got to get that video out. It’s an incredibly tough line to walk and you’ve got to be not only good, but smart and lucky, to be on the right side of it.

So then, is it worth it? Does the money gained from the ads pay the bills? With this campaign, we made a cool $285 off of YouTube ads. If I was a vlogger, I’d be kinda thrilled, but as a production company, this system just isn’t feasible for the content that we want to make.

So, revisiting my question and the whole point of this campaign. What did I learn?

It’s very simple, really. There is more than one way to skin a sleepy YouTube cat. Doing the weekly videos is phenomenal for some and doesn’t work for others. The magic of the web has been and hopefully always will be giving artists the terrifying freedom to pave their own road to success. We tried out a system that seemed fairly straightforward but that I haven’t necessarily seen anyone write about and I think we did quite well with it. The question, of course, is can we replicate it? I’ll let you know — we surely intend to try.

So, for you new creators, yes, this world is daunting, but try it. And, for the hell of it, try something new. Maybe your system will be the best system. Or maybe not. We’re still trying to see if we can replicate what we did twice, and if we can make it get even bigger. No easy task.

And, for you ad agencies and brands looking for a roadmap on how to go viral, there are many ways to do it. But the biggest tip I can provide you (other than hiring us) is to take a risk and let your creatives be creative. The web was built on risks, and if you want to dive into its murky waters, you better be prepared to take them and innovate, rather than tentatively inch your way in the steps of others.