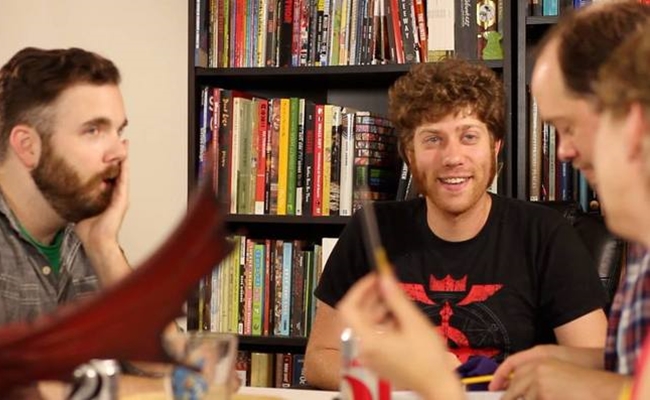 Description: As with several other web series we’ve featured on this blog (including the one we spotlighted in last week’s ‘Fund This’ column), Saving Throw‘s theme is tabletop gaming; unlike those series, it is not a scripted sitcom but instead hopes to teach viewers how to play tabletop role-playing games (such as Dungeons & Dragons).

Rather than taking the form of a boring tutorial, Saving Throw hopes to provide charismatic instruction through a trio of delightfully geeky hosts. The Kickstarter campaign describes the series as a mix of Tabletop and Mythbusters, and the signature exuberant style of the latter show is definitely present in the pitch video.

Creator Bio: The six people (three hosts and three producers) behind Saving Throw are all big time gamers, some for as much as 30 years. The series’ channel is also home to a very silly role-playing game parody of Pink’s ‘Just Give Me A Reason’.

Best Perk: For $85, the Saving Throw team will pen a “bardic song” about your life. We can only assume this will ultimately cause bards to sing your praises at castles across the globe.

Why You Should Fund It: Pen-and-paper RPGs get a bad rap. They’re really quite fun, and the strange characters who tend to enjoy them are part of the appeal. Saving Throw isn’t trying too hard to make its subject “cool”; it’s only attempting to show viewers that playing games like Pathfinder is a worthwhile way to spend your free time. The hosts seem to be greatly enjoying themselves, and this honest presentation should allow fans to do the same.