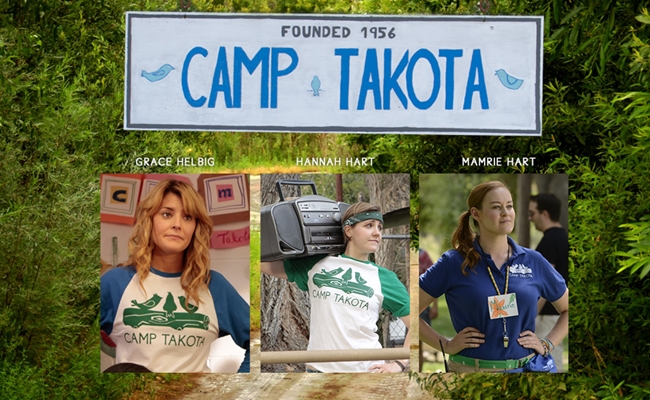 Camp Takota is here. Six months after it was announced, 11 weeks after it switched distribution platforms, and three days after stars Grace Helbig, Hannah Hart, and Mamrie Hart guest hosted YouTube Nation, Camp Takota is available for purchase from its official website.

Camp Takota stars Helbig, Hart, and Hart as a trio of best friends who reunite at the summer camp they all attended as kids. If you’re unfamiliar with the film at this point, there are plenty of trailers you can check out.

Of course, people who haven’t yet heard of Camp Takota are not the film’s target audience. Judging from Twitter, hundreds of fans have already purchased  and screened it. Well-known fans of the film include YouTube creator Brizzy Voices and celebrity chef Jamie Oliver.

Camp Takota‘s three stars also offered Tubefilter their thoughts on the film during its release party in LA. Ultimately, we learn that Grace Helbig and Hannah Hart are on the exact same wavelength, though you probably knew that already:

If you didn’t preorder Camp Takota or rush to the film’s website the day of its release, you still have plenty of time to purchase your copy. The basic digital download of the film (powered by VHX) costs $9.99, while more extensive packages offer extra perks for extra dollars.

For fans of the film’s three leads, Camp Takota is a must-buy. Even for general YouTube fans, the quality of the clips we’ve seen go a long way toward justifying the price tag. Forget House of Cards; you should watch Camp Takota today.