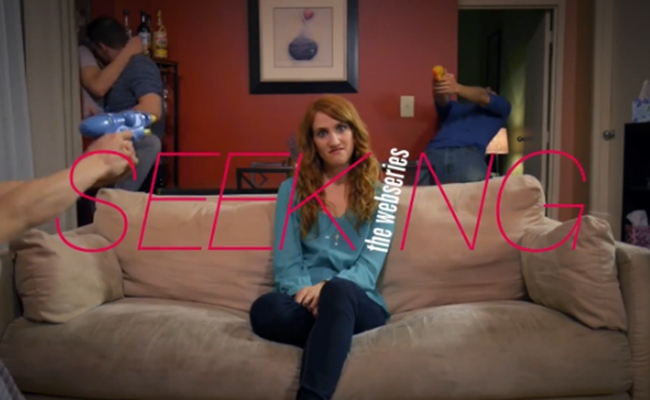 Seeking is a romantic comedy web series about a woman who flits from date to date in search of The One. That may sound like a stale premise, but Seeking adds in enough new wrinkles to divert a classic format, making it well worth a watch.

The central figure in Seeking is Ella (played by series creator Ronit Aranoff), a typically dishearted New York City resident who believes she will never find her match. Her roommates disagree, and thus a bet is launched: She must go on weekly dates with men, lest she be forced to embarrassingly purchase lube for her roommate during the busiest time of day.

Seeking does two things that put it a cut above other web series with similar premises. For one, Ella is not a fictional vessel for Aranoff’s real life frustrations. It is very easy for creators to use indie web series as a type of wish fulfillment, but Aranoff instead drew Ella’s dating stories from people all over the city rather than herself. “The minute we tell people we are doing a show based on real dating experiences, the personal anecdotes start falling out of people’s mouths,” she said in a release. “The beauty of this show is that we have woven together a large cross section of people’s stories to be told through the character of Ella. So this is really everyone’s show. Literally.”

Seeking’s second big advantage is its furious pace, which picks up from the very first minute of the first episode and does not subside. Ella, her friends, and her dates are all fast talkers, and they are tailor made for the Internet. There’s no time to overanalyze the show’s various scenarios. There’s only time to laugh.