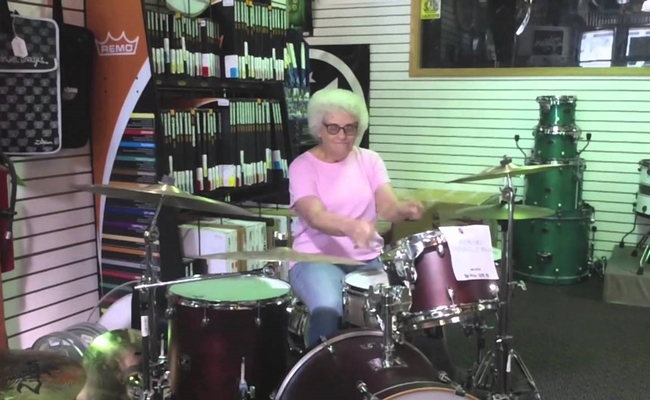 The finalists have stated their cases, the votes have been tallied, and the winner is in: The video of drumming grandma Mary Hvizda has won the top prize of $2,013 in JukinVideo’s Video Of The Year competition.

In case you missed it, JukinVideo was out to find the most noteworthy clip of 2013. Since Jukin usually deals in ‘viral video’ style offerings and UGC content, the finalists were generally short, sweet, and homemade. The competition was fierce, but in the end, it was La Crosse, Wisconsin native Dustin Hackworth who emerged victorious thanks to his videos of Hvizda’s drumming prowess.

Hvizda first made her debut on YouTube back in July when a video of her rocking out appeared on the YouTube channel of Hackworth’s Coalition Drum Shop.

The clip has been viewed more than five million times and has inspired a number of spin-offs. Most recently, Coalition filmed Hvizda as she laid down a heavy metal double bass pattern. Horns up, grandma.

Hackworth told Jukin Video the story behind the drumming grandma and revealed that her name is a misnomer:

“Our drum shop had been open for only about a year at the time, and every 3 months this older woman would come in, kindly ask if she could play one of our kits, and then proceed to play a very well orchestrated drum solo for about three minuets.  After that she would leave without saying anything to anyone, it was bizarre!

Finally, on about her fourth visit I decided to videotape her playing. At the time I didn’t really think anything about it, nor did I think anyone would care all that much. I uploaded the video to YouTube about a week later and it blew up. We had news stations calling us trying to figure who she was and no-one knew! The hunt was on. Finally, after seeing herself on the front page of a local newspaper she was delivering, she came forward.

Mary’s musical past turned out to be pretty interesting. She started playing in a drum a bugle corps when she was 15, and then over the next 25 years, in over a dozen groups as her career expanded. Ironically, she’s never had any grandchildren, let alone children of her own.

Mary also had to sell her kit a while ago, so we decided to give her a brand new one as kind of a “thank you” for choosing our shop to visit. We feel incredibly lucky to have stumbled upon such an amazing lady, and want to make sure she has to opportunity to grow her fantastic talent.”

Hvizda beat out Elvis-loving toddler Ella Mae, who finished second in Jukin Video’s competition. Jukin Media YouTube partner BatDad finished third, and the Dubstep Cat came in fourth. To celebrate the success of their Video of the Year contest, as well as set course for what is sure to be an exciting 2014, Jukin Media is hosting with Tubefilter a private party, which will go down January 7th at CES.

With his $2,013 winnings, Hackworth can now afford to soup up Hvizda’s kit. Rock on.