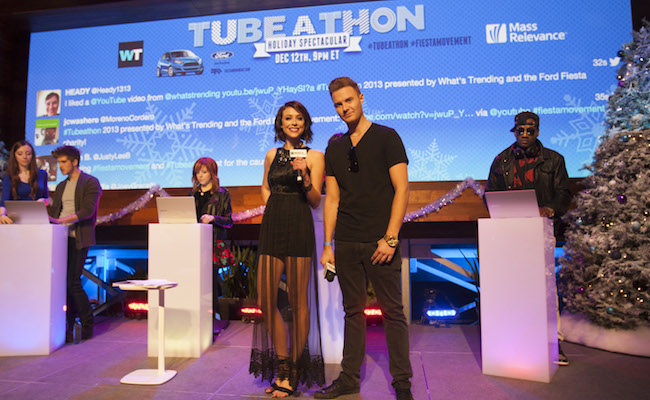 #Tubeathon: A Holiday Miracle And A Social Media Hit

Southern California isn’t exactly the first location that springs to mind when one thinks of a winter wonderland, but that didn’t stop the folks at YouTube Space LA from turning their studios into a veritable White Christmas for this holiday season’s annual #Tubeathon. 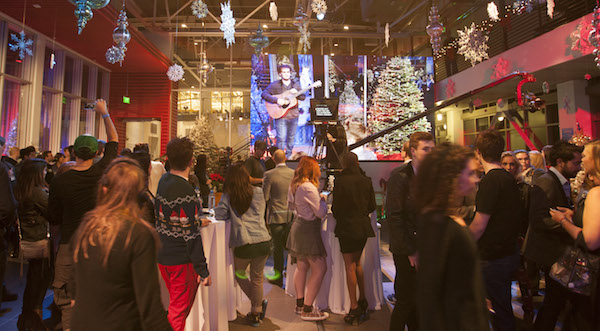 Presented by What’s Trending in partnership with Ford and its FiestaMovement, the second annual iteration of #Tubeathon was held this past December 12th, 2013 to a capacity crowd and broadcast live to millions over the internet. The evening, emceed by What’s Trending’s own hostess with the mostess Shira Lazar, parody king Bart Baker, and all-around wunderkind Ethan Newberry, was truly a meeting of online greatness for a worthy cause. Nearly 100 YouTube and traditional media celebrities gathered to raise money for Covenant House, a nationwide charity network dedicated to raising money for homeless children. With a powerful end goal in mind, spirits couldn’t have been higher for those assembled, as everyone participating worked to make the holidays a little brighter for those in need.

Furthermore, #Tubeathon’s method of raising money served as a perfect demonstration of the power of social media. By urging viewers at home to tweet about the event utilizing the key hashtags #tubeathon and #fiestamovement, the YouTube community was able to generate funding simply by doing what they do best: Engaging their internet audience. Monitoring the use of the targeted phrases, Ford committed to donating a dollar to Covenant House for every time the hashtags were used, and you can best believe those gathered to present the evening’s events were going to do everything in their power to get those phrases filling twitter feeds the world over.

As regular followers of my work already know, I’m something of a “YouTube Adjacent” individual,  which means I occasionally make videos and pop up in other people’s, but mostly I run around reporting on and celebrating this wonderful community. With so many friends, acquaintances, and personalities whose work I admire participating, I couldn’t not attend #Tubeathon, especially with such a noble endgame in mind. 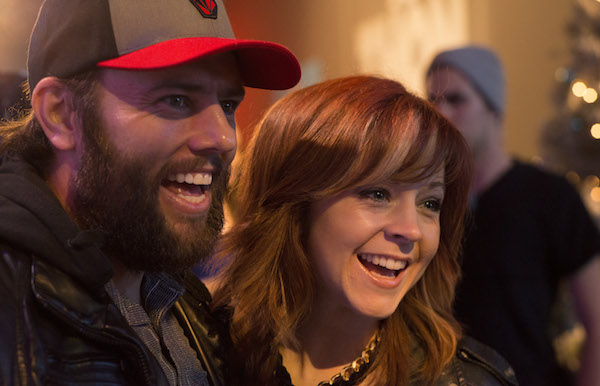 Donning my ugly Christmas sweater for the event (but not too ugly, mind you), I arrived at the Space a little early so I could take in all the magic as it happened. I wanted to observe all the hustle and bustle required to bring this momentous event to life, and in watching all the dedicated crew run to and fro, I could immediately sense the magic in the air. I can happily tell you that the desire to see #Tubeathon successful wasn’t merely limited to the onscreen talent, but extended to every last person at YouTube Space LA that evening. There was a joyous urgency spreading through the crowd that spoke to the night’s goal, and quite frankly, if I had to seek a definitive example of “the Christmas spirit,” I’d be hard-pressed to present better evidence than the unspoken motivation present in that room.

As previously mentioned, the Space itself had been transformed into a holiday sight to behold. Towering snowmen lined the entrance, and glorious baubles and trees filled the inside studio areas. Furthermore, a large throne bedazzled with candy canes and glitter occupied a far corner, suggesting a visit from one of the North Pole’s most notable. At the entrance of the main hall, a large blue carpet (in lieu of the traditional red) stretched out, serving as a glorious runway for the various stars to make their entrance.

And let me tell you, for the committed YouTube fan, the blue carpet was the place to be in the moments before the show. A quick glance would reveal MirandaSings making her way past reporters (also sporting a Christmas sweater, I must note), another would allow you to spy the cool and collected Tay Zonday. There was a YouTube personality for every taste, and all were intermingling and sharing laughs with one another. For a fly on the wall, it must’ve seemed like one heck of a party, which, considering the real party had yet to start, speaks to the level of good energy all around.

Once inside, Shira, Ethan, and Bart took the stage, welcoming all gathered and laying out the mission statement for the evening. Behind the hosts, in an orderly row, were several laptops, primed and logged-in to Twitter. Although seemingly simple working stations, these would be some of the event’s greatest tools for reaching #Tubeathon’s goal. Throughout the telethon’s two hour runtime, notable YouTube stars were invited up in groups to log-on to the social networking site and interact with fans, discussing the holidays, and urging them to use the hashtags for Covenant House. The likes of Joey Graceffa, Hank Green, DeStorm, Lindsey Stirling, and so many more all engaged with fans from the laptop stations, driving money towards the evening’s goal.

Meanwhile, on YouTube Space LA’s soundstage, various musical guests were on-tap to perform a bevy of holiday classics and original songs to keep everyone rocking through the evening. From an opening number performed by Kurt Hugo Schneider and Sam Tsui to a throng of other remarkable performances, including songs by Chester See, Cori B and Mali Nicole (who were introduced by Snoop Dogg), and many more, the night was definitely not short on musical moments. In fact, I was front and center for Lia Marie Johnson and Charisma Kain’s wonderful rendition of ‘Silent Night,’ and I was joined by none other than Santa Claus (I told you he’d show up), who didn’t want to be left out of the evening’s harmonious sing-a-long fun.

Between the musical performances, the shenanigans on the main stage, and a countless array of video greetings from afar (everyone from Nick Cannon to Davey Wavey sent a video of support), there was nary a direction you could turn at #Tubeathon that didn’t offer something fresh, fun, and exciting. Of course, with that much personality under one roof, it goes without saying that there was more than a small amount of excitement to be had. Even as Oli White, Harrison Webb, and myself caused trouble in the photo booth, Grace Helbig of Daily Grace was taking over the DJ table, all while controversial YouTuber Jaclyn Glenn was snapping pics with Santa. It was a night of much mirth and mayhem, and I’m happy to report it was ultimately a success. 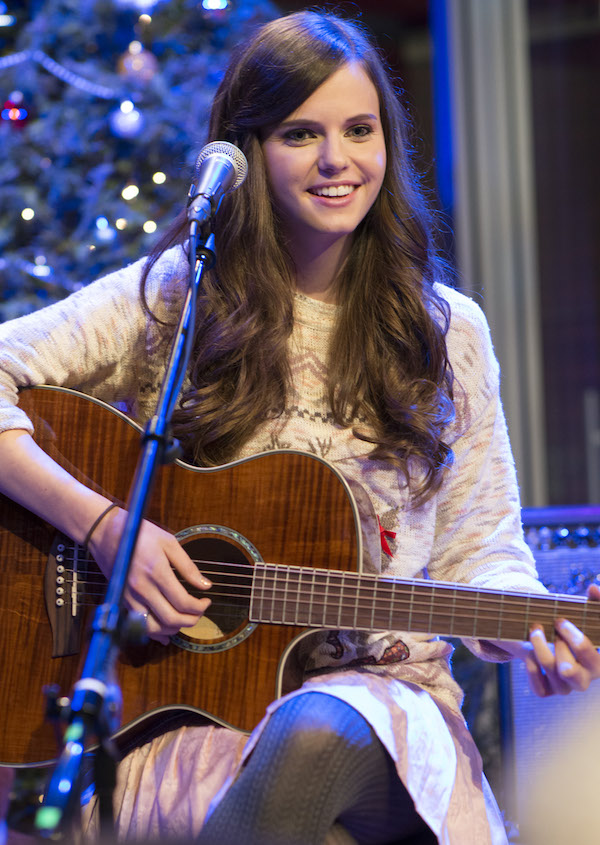 According to numbers presented to me by Shira Lazar following the event, there were more than 50,000 tweets utilizing the key hashtags, with 36,000 of them going out during the live event itself, marking a nearly 100% increase since the first #Tubeathon a year ago. Furthermore, the response during the telethon was so overwhelming on Twitter, it caused #Tubeathon and #FiestaMovement to become the #2 and #3 top trending hashtags during that presentation time and into the evening. The overall cumulative result, taking into account tweets that went out in the time after #Tubeathon was something to the tune of 167,000. Although these remain raw numbers, the implication of response and marked rise in participation from last year’s #Tubeathon is very encouraging to all involved, and the intent to full the $1 per tweet remains intact.

With #Tubeathon resulting in such a massive success, all involved, including the thousands who tweeted from home to help make it happen, can take solace in the fact that they participated in making a Christmas miracle for children in need. Furthermore, encouraged by the overwhelming victory of the evening, Shira shared with me that she and What’s Trending are already looking to next year and how they can make it a bigger, better, and more charitable event.

#Tubeathon proved, in the most magical way possible, that you can embrace the spirit of the season, have fun and party, but still do something to help others. Beyond that, it further exemplified what many have known all along: That YouTube is a community, and in bringing that community together for a cause, literally anything can be achieved. As the old adage says, “It takes a village,” and when that village is a digital one, the whole world can be changed…one tweet at a time.

Michael Varrati is a writer, actor, and pop culture enthusiast. In film, he has appeared in a variety of genre projects and has written movies for some of the horror genre’s most iconic talents. In addition to his work on the silver screen, Michael’s writing has appeared in a number of publications, including The Huffington Post, FearNet, VideoInk News, Videoscope magazine, and a celebrated regular column on peacheschrist.com. You can keep up with Michael and his daily musings by following him on Twitter @MichaelVarrati.