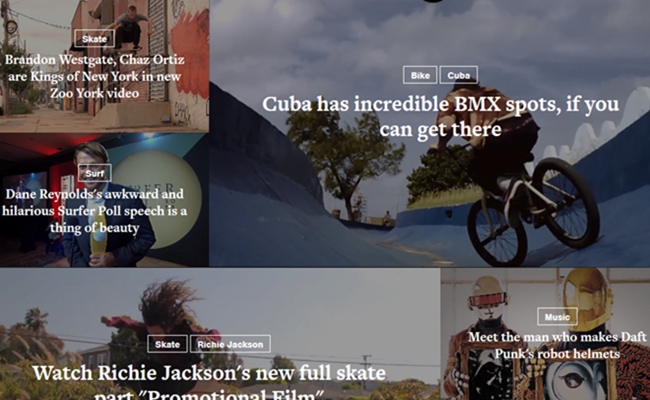 Since it was first launched in early 2012, Network A has provided extreme sports fans with a variety of neat, outdoorsy web series. Some of these, such as Every Third Thursday (AKA ‘Pimp My Snowboard’), Tuerck’d (AKA ‘Cool Drifting Stunts’), and Asphalt NYC (AKA ‘New York City Extreme Sports Dudes’) have particularly piqued our interest. All of Network A’s content is now available on a new website, which hopes to attract the channel’s 461,000 subscribers outside of YouTube.

The website allows users to filter by their extreme sports of choice and features content from all of Network A’s shows. Individual events also have their own videos.

Bedrocket (which runs Network A) has previously built websites for some of its other channels, including Kick TV. With the YouTube Original Channels Initiative no longer supporting Network A, it makes sense for the channel to try and draw its viewers toward more profitable revenue streams, though the new website still uses YouTube embeds.

“Network A has built a community of action sports enthusiasts who seek amazing content online and through mobile,” said Brian Bedol, CEO and founder of Bedrocket. “Our sophisticated interface offers athletes, fans and advertisers a customizable and uncluttered experience featuring the best original and curated video.”

Action junkies would be wise to wander over to Networka.com at first chance. No matter their sport of choice, they’ll find enough thrilling videos there to get their fix.