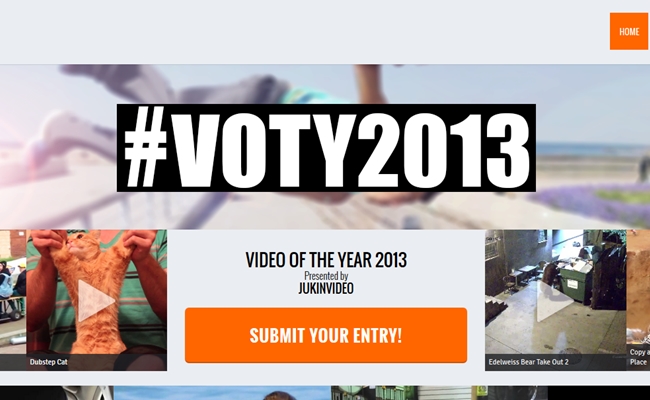 JukinVideo To Award $2,013 To The Best Viral Video Of The Year

JukinVideo is home to thousands of entertaining viral videos, but the platform is searching for The One. To that aim, it’s launched Video of the Year 2013 (aka #VOTY2013), a contest that will ultimately crown the best piece of contagious moving imagery to hit the Internet in 2013.

Since JukinVideo is host to an assortment of user-generated content gems, ‘Video of the Year’ isn’t meant as an all-encompassing competition. The submissions that will draw the favor of the site’s users will be closer to this video of a sea lion stealing a fish than, say, this explanation of the various sub-units of the imperial system. Given JukinVideo’s ties to the Vine community, I’m sure many six second installments of online ephemera will also find their way into the running.

Submissions for the contest will be accepted until December 15th. On the 16th, fan voting will begin, and the video that scores the most votes by the end of the year will be announced right here, exclusively on Tubefilter and take home the grand prize of $2,013 (which is, and I’m just guessing here, one more dollar than the amount this contest would have netted last year).

“The contest is a great opportunity to showcase the talents of the video community, and for the public to participate in rewarding their favorite videos,” said JukinVideo Founder and CEO Jonathan Skogmo.

The viral video landscape is more fragmented than ever, with the likes of Vine, Instagram, and GIFs making inroads into YouTube’s once-dominant monopoly on user-generated content. However, there are still just as many cutes, wins, and fails as ever, and choosing the best one will prove to be a monumental task. But regardless of who wins and from which platform the winning video hails, VOTY 2013 is sure to be entertaining. Interested parties should be sure to enter right here.