The YouTube Music Awards Were Weird, And That’s A Problem 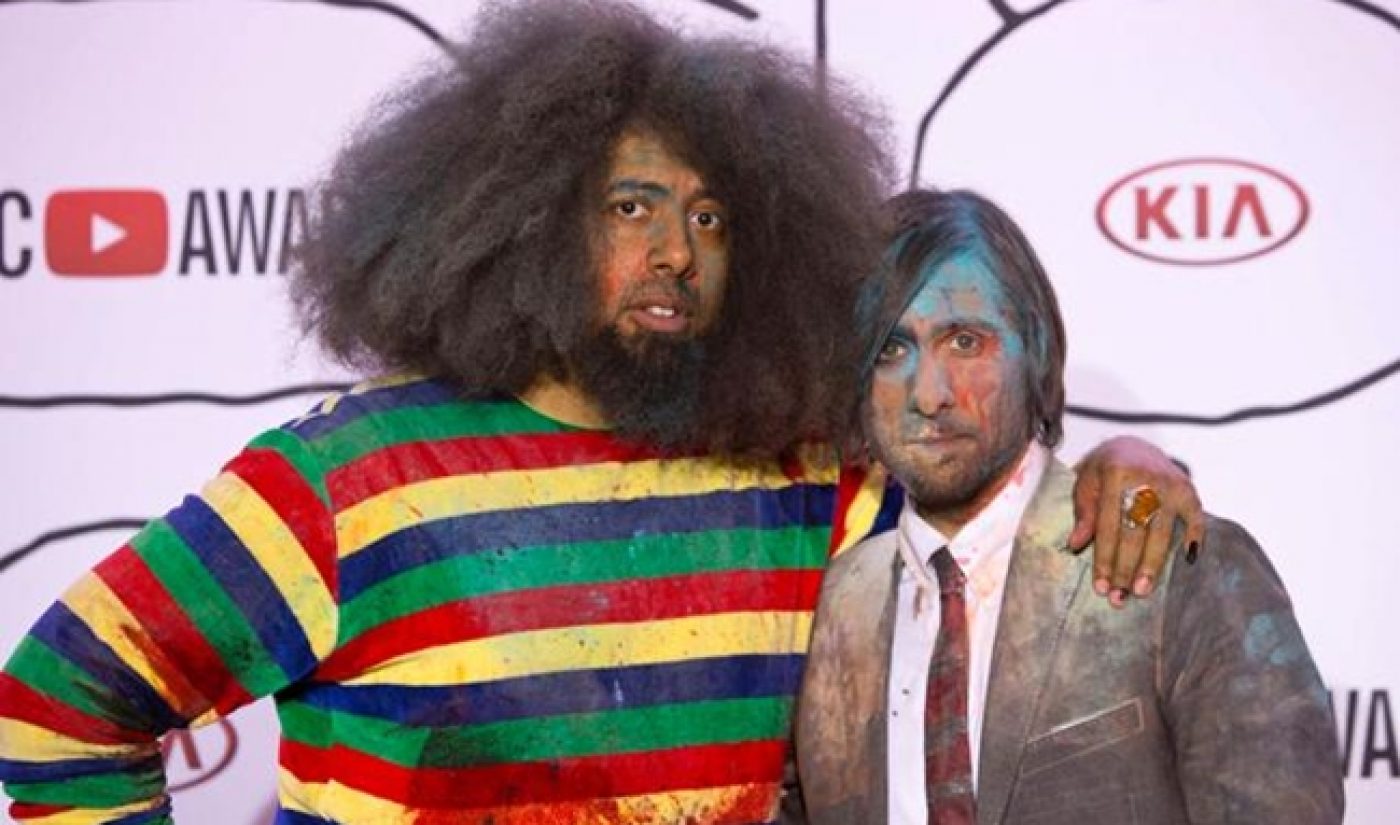 Several talented musicians took home trophies at the first ever YouTube Music Awards, but the big story was the broadcast itself. It was (to borrow an adjective from major news outlets that covered the event) weird. Host Jason Schwartzman got a face full of blue paint, he and co-host Reggie Watts were at one point handed crying babies, and there were several more cringe-worthy moments in between. YouTube, director Spike Jonze, and producers Vice Media wanted to create an “anything can happen” kind of event, but the result left a lot to be desired.

The bizarre presentation was all part of the plan. A day before the YTMAs, Schwartzman told The Hollywood Reporter “I know 10 percent more than you do,” also noting that the show came together “in the last seven days,” and that “there is a certain sense of relative ‘WTF’ around here.” Jonze echoed a similar sentiment. “The whole night is supposed to feel like a YouTube video — the raw messiness of making stuff,” he told Mashable. “My disclaimer is that none of us have ever done this before. There’s bound to be a bit of a mess, hopefully in the best way, sometimes like YouTube videos are.”

It’s a good idea in theory. YouTube is a platform built on creators who are ‘different’ and don’t ascribe to traditional narratives of form, style, and on-screen demeanor. Many of the site’s viral videos are egged on by the ‘WTF Factor’, which compels viewers to share when they see a bunch of Norwegians dancing in a forest and making silly noises. By being both distinct from traditional awards shows and including a healthy dose of WTF, the YTMAs tried to both honor their platform of choice and try something innovative and different. But it didn’t quite work, and there are four reasons why:

The sound quality on YouTube’s live stream was terrible. Lady Gaga’s unique, soulful performance was often inaudible, several performers had trouble working their microphones, and the whole event was hard to hear, even at full volume. This is particularly problematic for an event based around live music. It was hard to truly take in the talented performers when online viewers could barely make out what they were singing.

There were some semi-scripted sections–and they were not well-executed.

Schwartzmann and Watts told/warned the audience at the beginning of the show that there was no script and they would be forced to endure obstacles at some points throughout the evening.  To overcome one of those obstacles, Schwartzman and Watts had to search around for the cards on which the winners’ names were printed. One was hidden inside a cake. Another was hidden on the stage itself.

The premise played out as disrespectful to the artists, who were waiting patiently to see if they won or lost. It also created an unnecessary diversion that slowed proceedings to a crawl and invited viewers to conclude that the awards themselves weren’t the important part of the YouTube Music Awards. An experimental show does not require unique, risky choices at every single moment, especially during the moments where it’s supposed to honor and celebrate talented artists.

The show featured YouTube’s spirit, but a huge emphasis on traditional media stars.

The unpredictable style Jonze tried to capture is distinctly YouTube, but the main draws of the YTMAs were well-established acts like Eminem (who filmed a very cool “live music video” during the show) and Lady Gaga (who debuted a new single). I can understand YouTube’s desire to cater to these types of musicians. They are among the most viewed creators on YouTube, they should be more engaged with the community, and there is a huge, untapped potential within their respective fan bases.

The fans of these popular musical acts, however, don’t want a weird awards show. They just want to see singing and dancing and emotional acceptance speeches. And the YouTube community that would enjoy such a bizarre spectacle at times felt pushed aside to make way for the whims of the traditional media. Nothing exemplified this fact more than the moment when YouTuber DeStorm won an award–only to have Schwartzman mispronounce his name (you say it like Day-Storm, Jason).

.@DeStorm wins YTMA award based on audience votes. Celebrity hosts mispronounce his name. That about sums it up.

As with YouTube’s live comedy show, the YTMA producers couldn’t decide whether they wanted to tailor their show to YouTube or traditional audiences, and the result ended up in a weird in-between place that left many confused and unsatisfied.

There were some exceptional performances during the show. As I previously noted, Eminem was great, as were Gaga and M.I.A. The performers who gained their fame on YouTube–such as Lindsey Stirling and CDZA–showed why so many people flock to their videos.

A show with all of these performers (both mainstream and born-and-bred YouTube talent) as the stars could’ve worked much better; instead, the YTMAs will be most remembered for Schwartzman and Watts’ peculiar hosting segments. Which brings me to the most important point:

When YouTube puts on big live events like the Comedy Week live show and the YTMAs, it attracts viewers who otherwise wouldn’t tune in to the site’s programming. For one night, fans of Eminem and Lady Gaga and Girls’ Generation had their eyes peeled on YouTube, and it was a chance to show off a site full of great original content worth watching. It was a chance for viewers who don’t subscribe to a single channel to learn the brilliance of Lindsey Stirling and CDZA and DeStorm.

So when YouTube puts the show in the hands of stars like Jonze, Schwartzman, and Watts, it hurts the YouTube community. Those three figures are all incredibly talented, but to them, YouTube is an experimental platform. If they try a bizarre online show and see it fail, they can still return to their established careers with no harm done.

I’m all for this type of experimentation. It’s great to see creators like Jonze and Watts mess around on YouTube, because it shows that they’re interested in the platform. However, it needs to be self-contained to their individual channels. When it is placed in front of a big audience, it tells the uninitiated public that YouTube is a place for weirdos and that you will only enjoy if you’re sufficiently strange. This erroneous belief turns off viewers who might otherwise be interested in checking out more content on the platform.

YouTube creators could’ve gained millions of new fans during the YTMAs. More people could’ve added subscriptions to channels big and small. For the likes of Lindsey Stirling and DeStorm, YouTube is a job, and a well-executed YTMAs would’ve represented a raise of sorts. Instead, YouTube catered to the experimental whims of a few familiar faces, and the end result satisfied few and missed a golden opportunity to grow the YouTube audience.