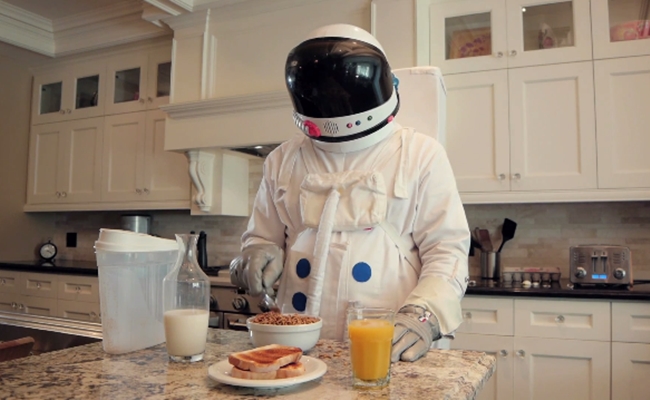 Chris Hadfield is back on Earth, but he hasn’t let his terrestrial status keep him out of the spotlight. The Canadian astronaut, who wowed YouTube during his recent stay on the International Space Station, has released a clever trailer for his new book, An Astronaut’s Guide To Life On Earth.

Hadfield introduced himself to the Internet in early 2013. He became a YouTube celebrity of sorts when videos of him performing various actions in space–such as wringing a washcloth, eating nuts, and crying–went viral to the tune of millions of views. It all culminated in an out-of-this-world cover of David Bowie’s ‘Space Oddity’, which has held up as one of the most surreal, incredible, and wondrous YouTube videos of 2013.

Hadfield is back on earth for good; he retired after his most recent journey home. Though he will never blast off again, Hadfield has kept active with a series of videos on his YouTube channel where he completes various Earth tasks while dressed in a space suit. These ‘Astronaut’s Guides’ were eventually compiled to create a very fun book trailer.

On Reddit, where Hadfield is worshiped as Space Jesus, he explained how the trailer came to be. “A little over a month ago I challenged my son to make a video for my book launch that wasn’t just some over-the-top ad,” he said. “Here’s what he came up with.”

As for the book itself, it is now available on Amazon. We’ve previously noted how book trailers can be a useful tool for authors; Hadfield’s entry is particularly brilliant, so I hope his book sells like hotcakes.