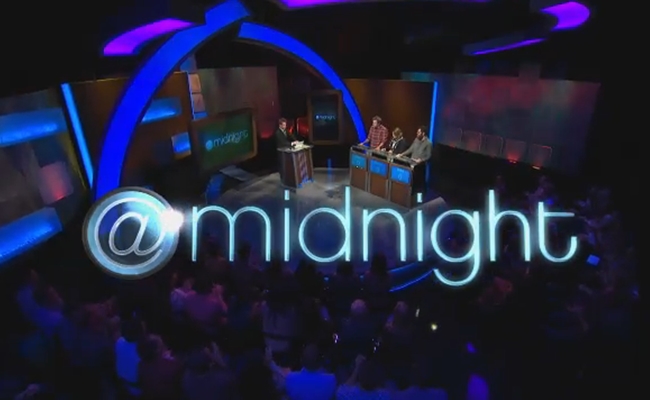 On October 21st, Chris Hardwick will attempt to take over late night cable TV. The Nerdist creator will host @midnight, a new game show on Comedy Central produced by Funny or Die.

Each @midnight episode (Comedy Central has ordered four to start) features three comedian contestants to whom Hardwick will feed a stream of funny, weird, sad, and/or ridiculous  social media videos, images, and posts. For each item, the contestant who can come up with the funniest quip, caption, or commentary will score points given out by Hardwick. The format is reminiscent of a Write Now!, which aired on Nerdist about a year ago and also featured three comedians competing to write the best jokes on the spot.

“It’s very British at heart,” said Hardwick. “It’s really just a structured reason to bring comics together to make fun of all the topical things they saw that day that came up in various social-media outlets.”

Both Hardwick and Funny or Die toe the line between traditional and new media, and from the looks of it, the contestants will hail from a similar in-between place. The first episode will feature Doug Benson (who had his own online special via Chill), Natasha Leggero (who currently hosts Tubbin’ With Tash on JASH), and Kumail Nanjiani (who parlayed his gig on Portlandia into a web series spinoff).

As it will go on The Colbert Report, @midnight has a very tough act to follow, but Hardwick isn’t worried. “It’s so much fun and so silly,” he said. “It’s all guilty-pleasure stuff that we’re making fun of, so it should be a nice comedown from using your brain a lot on The Daily Show and Colbert. We want to hilariously glide people to sleep and into their beds at night.” Good luck, Chris. If Daniel Tosh can have a hit show where he makes fun of silly videos, I’m sure you can, too.