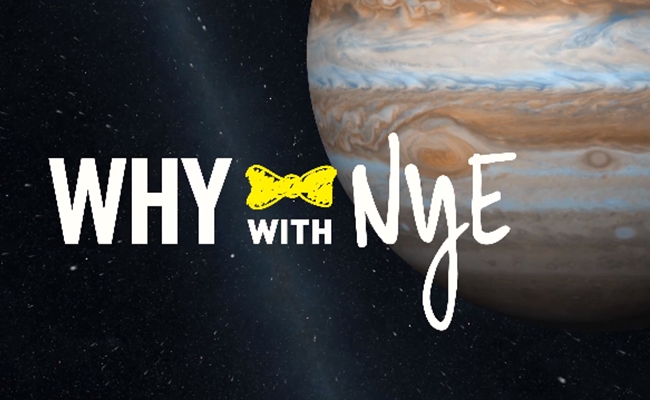 To remind us that space is super cool, NASA is turning to one of its most exuberant spokesmen. PBS legend Bill Nye has taken to YouTube for Why With Nye, an eight episode web series centered on Juno, NASA’s ongoing mission to Jupiter.

Why With Nye is housed on the THNKR channel, where it is a nice complement to all the other educational and brainy programs contained therein. In each video, Nye explains a different part of the mission, from the elements of the spacecraft to the makeup of our solar system’s largest gas giant. He also took time to describe the ultra cool process through which Mission Juno will use the Earth’s gravitational pull like a slingshot to send its spacecraft rocketing towards Jupiter at record speeds.

In Why With Nye, Nye uses the same style that made him a household name back in the Bill Nye The Science Guy days, using his eccentric personality and endless reserves of science knowledge to appeal to both kids and adults. Nye is, along with this guy, one of NASA’s best hopes for re-energizing a public that doesn’t seem interested in heavily funding its space program anymore, so he was a smart choice to host a series about one of the Space Administration’s most important current projects.

Plus, with Gravity painting space as a cold, cruel world filled with untold disasters, it is refreshing to have Nye remind viewers that the big, empty unknown can be pretty cool, too.