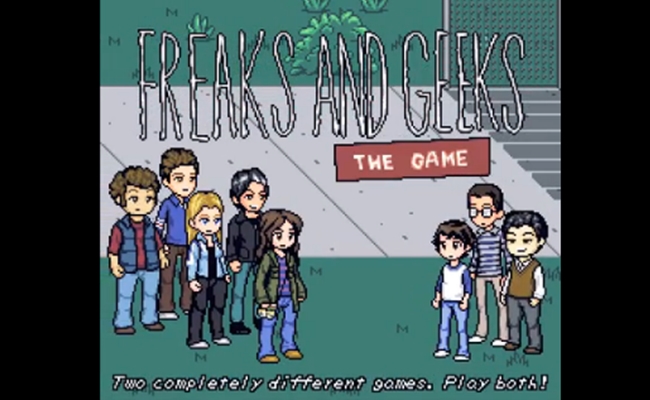 It’s been 13 years since Freaks and Geeks last explored the ups and downs of early ’80s high school life, but the short-lived NBC cult hit continues to have a dramatic effect on its audience. Two big fans of the show–Benny and Rafi Fine–have now shown off the depth of their love by turning Freaks and Geeks into a YouTube-based choose-your-own-adventure game.

This is the third time The Fine Bros have turned a popular series into a playable 8-bit version. They first pulled it off with Twilight and later gave the same treatment to Saved By The Bell, but they seem most passionate about their most recent project. “Freaks and Geeks is our favorite show and has influenced our career as filmmakers,” they told Tubefilter. “This game is our tribute to the cast & crew of this brilliant but cancelled show.”

The game puts the player into the shoes of spunky heroine Lindsay Weir, who must choose between the clean-cut life towards which she has been led and the dangerous appeal of the Freaks, led by all those Judd Apatow actors you know and love (Franco, Rogen, Segel, etc.) As chiptune remixes from composer Doctor Octoroc fill the player’s ears, he must choose between several pairs of dialogue options, which then send him to another video via YouTube annotations. It’s a pretty standard choose-your-own-adventure game, bolstered by Octoroc’s charming 8-bit animations (and lacking all of the grisly death scenes that are commonplace within the genre). In total, there are 15 ‘playable’ videos included thus far in project.

The Fine Bros and Doctor Octoroc will later release an expansion pack that will allow players to assume the role of Lindsay’s brother Sam, playing out his storyline among the geeks. I look forward to checking that version out as well, even if it will be missing the charm that only James Franco can provide.