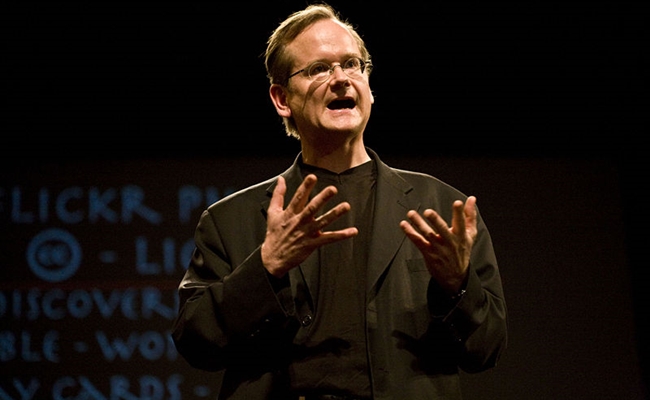 Most creators who are sent copyright infringement notices through YouTube’s ContentID ‘fingerprinting’ system take the path of least resistance, removing or altering the offending content and avoiding legal retribution. Not so for Lawrence Lessig. The Harvard professor and Creative Commons found recently received a DMCA takedown notice for one of his video, but rather than complying with it, he is seeking legal action against the record label that sent it, arguing that YouTube’s automated policy misleads creators.

The ordeal began when Australian record label Liberation Music sent Lessig a takedown notice after its automated content matching system flagging one of his videos for using Phoenix’s ‘Lizstomania’. Of course, had Liberation’s copyright hawks taken the time to actually check out the offending clip, they would have learned that Lessig used the song as an example of fair use, showcasing the ways music can be legally included in YouTube videos.

Suffice to say, Lessig was not happy. He has long been one of the most outspoken opponents of strict copyright enforcement, and he believes the current content matching system flags videos that are not infringing copyright. “If I’m using [music] for purposes of critique, then I can use if even if I don’t have permission of the original copyright owner,” Lessig told NPR, citing the doctrine of fair use. In addition, he asserts that the automated threats represent “bad faith lawsuits”, where improper legal action is used to strong arm potential defendants. “What we’ve got is this computerized system threatening people about content that’s on the Web, much of it legally on the Web,” he said.

And so we get to the lawsuit. Though Liberation has already backed away from its takedown notice, Lessig wants to change the system so that labels cannot threaten lawsuits on videos adhering to fair use. Of course, Liberation is far from the only party making use of the content matching system; if Lessig really to make a splash, he should take his fight to some of the bigger boys in the recording industry, or to YouTube itself.

Of course, there are valid counterarguments to Lessig’s position. Most importantly, many creators are benefiting monetarily off of copyrighted material without paying royalties, the subject of a separate lawsuit aimed at Fullscreen. But Lessig is the fancy-schmancy Harvard Law professor here; something tells me he knows exactly what is and isn’t allowed. Props to him for attempting to change a flawed system.