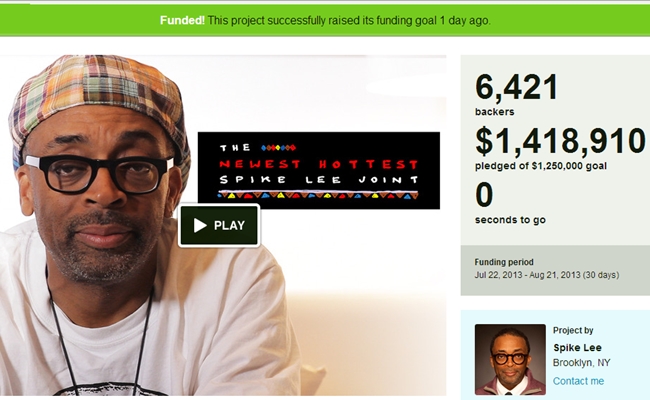 Spike Lee’s Kickstarter Tops Out At $1.4 Million; Was It A Success?

Though it got off to a slugglish start, Spike Lee’s Kickstarter project was able to eventually exceed its goal. The campaign has concluded, with the outspoken director securing more than $1.4 million to fund his next ‘Spike Lee Joint‘.

As with Zack Braff’s contentious campaign, Lee’s big-name fundraising drive has attracted its fair share of controversy. As with Braff, Kickstarter has jumped to Lee’s defense, unloading its usual talking points about the ‘fundraising trickle-down theory‘, fans being ultimately responsible for what the support, and the site’s status as an open and free environment. But debating Lee’s ‘right’ to use Kickstarter overlooks another important issue: his campaign might not have been as successful as it seems.

Sure, it looks like a success: Lee raised the third-largest sum in Kickstarter history, secured a green light for his next film, and can now produce it without spending a dime of his own money. Upon examination, however, Lee’s funding is very top-heavy. As noted on film blog The Bitter Script Reader, the average donation to Lee’s campaign was almost four times as much as Veronica Mars and Wish I Was Were, 42.8% of his total came from ‘unlisted’ donors who didn’t sign up for any rewards (suggesting that they were willing to simply throw money at their director friend), and 68.9% of his total funds came from under 10% of his donors. Given those numbers, we can expect Occupy Wall Street protesters to show up outside Lee’s house any day now.

The most salient counterargument to these data concerns Lee’s most expensive perk, which includes dinner and front row seats at a Knicks game. Lee’s defenders can use this to claim that Lee earned a lot of money from each donor because he made his high-priced perks so compelling–but that still doesn’t account for the unlisted donors chipping in nearly half of the project’s budget.

Lee’s unbalanced funding breakdown suggests that fan support for high-profile campaigns has eroded. The big names can still get what they need by calling in favors, but the commoners are fed up with the perceived greed of the Hollywood elite. In truth, the average Kickstarter backer understands the site’s claim that the power is ultimately in each donor’s hands, and he is wielding that power to make it harder for the rich to get richer.