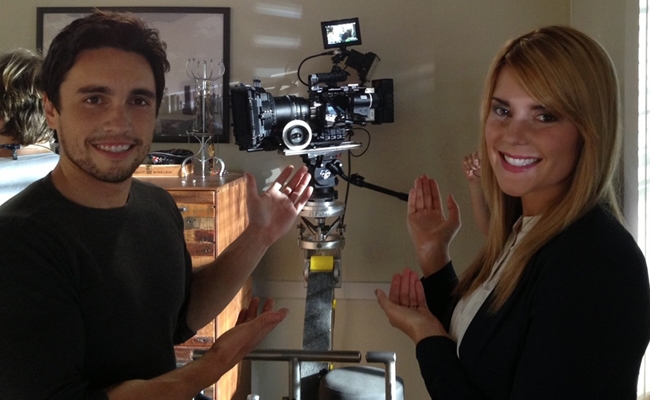 Camp Takota, an upcoming feature film set for release on Chill, will be anchored by established YouTube personalities and bffs Grace Helbig, Hannah Hart, and Mamrie Hart. While these three leading ladies will already bring a large audience to the film, a few new cast members are adding to the hype. YouTubers Chester See and Sawyer Hartman have joined the project, and both were present during the first day of filming.

Both See, who has 1.2 million YouTube subscribers, and Hartman, who has 534,000, have filmmaking experience. See has released a few shorts on his personal channel, and most of Hartman’s most popular videos are films he created. Both of their roles are as-of-yet unannounced, but as the filming for Camp Takota began, See gave the ladies a thrill by striking a shirtless pose. Work it, Chester.

Camp Takota will star Helbig, Hart, and Hart as camp counselors at their former sleep-away stomping grounds. The trio revealed the film (in appropriate summer camp garb) at Vidcon.

As production continues, fans can follow along by creating an account on the film’s official Chill page. “We’re making a movie and it’s gonna be awesome, and not only that, we’re so excited that we get to bring you guys, the fans, along with us here at Chill.com,” said Nick Riedell, one half of Camp Takota directorial pair The Brothers Riedell, before filming began. “You guys just sign on and we get to show you everything.” I think the ladies probably want you to show them more Chester See pec shots, Nick.