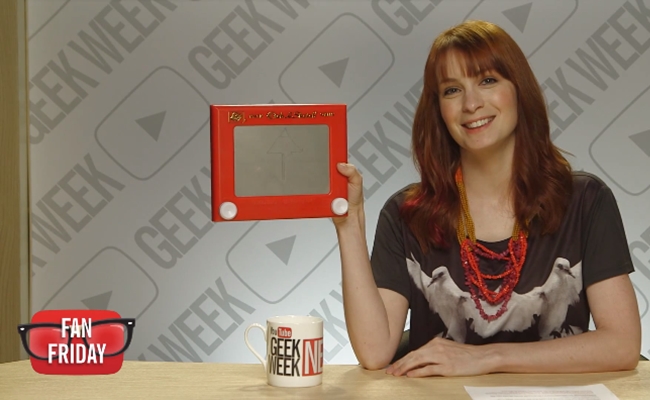 Friday marked the end of YouTube’s first ever Geek Week (aside from a relatively pointless ‘best of’ day on Saturday). For its final theme, YouTube paid homage to the people who made the event possible: the fans.

Felicia Day, who has probably waited her whole life for an event called ‘Geek Week’, served as the day’s host. She seemed positively giddy on camera as she ran through a few of the day’s top videos.

Day’s Geek and Sundry channel was heavily involved in the day’s festivities, as it brought in Hannah Hart and Furious Pete for a hybrid cooking/art competition. The Crabstickz channel brought in all of the most famous British YouTubers (danisnotonfire, AmazingPhil, TomSka, charlieissocoollike, and others) for I Can’t Even, a trivia game specifically themed around nerdy topics. Among lesser-known creators, Todd’s Sketches provided a recap of Breaking Bad composed entirely within Etch-a-Sketch. I’m not sure what theme these three videos have in common, but I’m pretty sure if we say the word ‘geek’ enough we can link them together.

The list of channels also involved in the final day of Geek Week includes The Slow-Mo Guys, Lindsey Stirling, and The Fine Bros, among many others.

I personally thought Geek Week was a much tighter event than Comedy Week, with a significantly more organized schedule and, overall, higher quality videos. Though I am now totally desensitized to the word ‘geek’ and its myriad connotations, I’m glad YouTube dedicated a week to people whose interests are just a little bit strange.