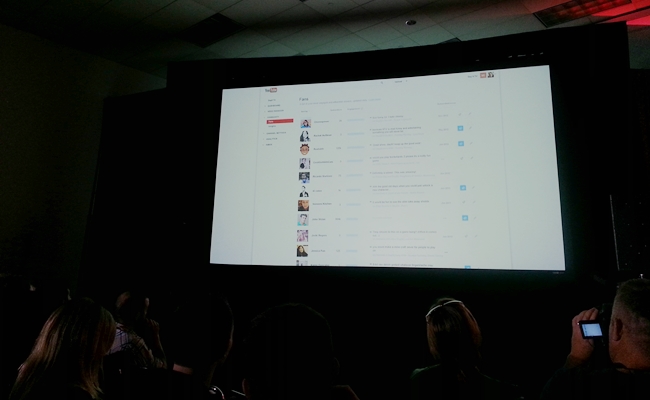 YouTube Will Let Creators Single Out Their ‘Top Fans’ On Google+

One of the developments YouTube revealed during its presentation at Vidcon regarded a new feature that will more prominently integrate Google+ into each creator’s arsenal of tools. It’s called ‘Top Fans‘, and it lets YouTubers with a large enough subscriber base group there most diligent followers into one easy-to-contact circle.

YouTube’s Director of Project Management Shiva Rajaraman introduced the new toy alongside Software Engineer Rushabh Doshi. Essentially, an algorithm will determine which of a channel’s subscribers are the most engaged. It’s probably safe to assume this algorithm will resemble a Klout score of sorts, with the subscribers who watch, comment on, and share a channel’s videos earning a certain amount of social ‘influence’. Once these top fans have been determined, they can be grouped together in a Google+ circle, where creators can learn about them, talk to them, and share content with them.

I can see top creators using this tool to encourage top fans to share more of their stuff. On the other side of the coin, we can expect gaggles of teenage YouTube users to start doing all the clicking, sharing, and commenting they need to become one of Smosh or Toby Turner‘s top fans.

Right now, the feature is only available to channels with at least 5,000 subscribers, so if you want to organize and control your own army of YouTube minions, make sure you’ve got enough subs to participate.