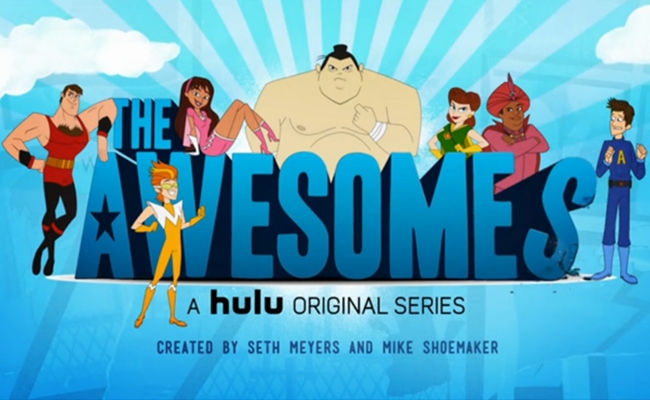 ‘The Awesomes’ Is Awesome, But Is It Awesome Enough?

Hulu‘s most hyped original series has arrived. The Awesomes, Seth Meyers‘ animated comedy about a ragtag group of superheroes, has debuted its two part pilot episode.

Meyers stars as Prock, the weak-willed and somewhat incompetent son of Mr. Awesome, a legendary superhero beloved by all. When his dad retires, Prock must pull together a group of troubled replacements, many of whom are voiced by SNL cast members (including Taran Killam and Kenan Thompson).

The result is an enjoyable animated sitcom, if a pretty predictable one: the shtick here has been done many, many times before, because it is usually a funny one and easy to adapt to fit a number of different scenarios. The Awesomes isn’t terribly unique, but there’s no doubt it is fun. Special props go to Bill Hader for his sinister villain, Malocchio.

The question about The Awesomes, however, is whether it is good enough. After all, it has been in the works for so long that it was the most hyped Hulu show at both the 2012 and 2013 Hulu Newfronts presentations. As I’ve previously noted, Hulu will need a strong originals library in order to lessen its reliance on licensed programming. The Awesomes is passable, but it’s hard to say whether it compares favorably to recent efforts by Netflix, or, more appropriately, Amazon.

Let me put it this way: If Hulu wants to compete with the platforms most similar to it, it needs to either release shows more quickly than The Awesomes or more exciting than The Awesomes (which I can’t see generating much social media buzz a la Netflix’s shows). I could be wrong; there’s still a lot of The Awesomes left to come, and it certainly has enough talent and whimsy on its side. From the pilot, however, it seems to be content with the label of ‘fun, likable, animated comedy’, and it’s hard to see it transcending that label.