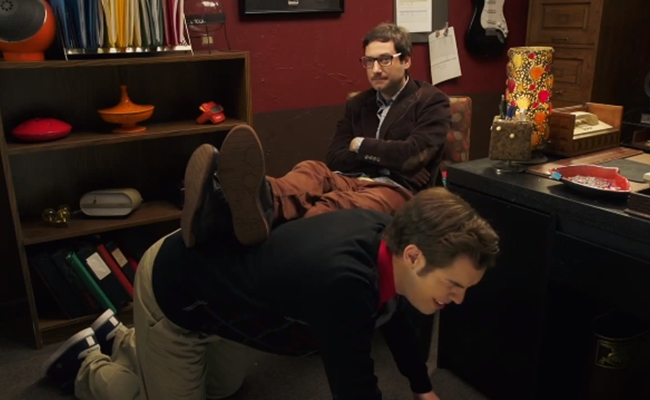 More than six months after it aired its last episode, MyMusic has resurfaced. The Fine Bros have released a trailer for the musical sitcom’s second season, which will return old favorites while also enlisting the talents of several new cast members.

Benny and Rafi Fine announced the second season back in May after a successful initial run that included 34 episodes. Altogether, the MyMusic channel has amassed nearly 400,000 subscribers and close to 30 million views before even factoring in the added engagement provided by the show’s many, many transmedia elements.

So what’s in store for season two? In general, the trailer suggest that MyMusic‘s general tone will be the same, with broad caricatures serving as parodies of common music genres. Adam Busch‘s Indie and Grace Helbig‘s Idol will continue in their leading roles, and there seems to be a much bigger role for Jack Douglass‘ much-abused Intern 2 this time around.

Several other new faces will join as supporting characters. Lee Newton seems to have a big role as Country, and fellow SourceFed anchor Joe Bereta will also appear. Other new cameos will include Joey Graceffa, Colleen Ballinger, and what appears to be Freddie Wong dressed as an elephant. The Fine Bros seem to know everyone who’s anyone on YouTube, so don’t be surprised if other known names pop up as the season goes on.

MyMusic will return on August 20. Can it repeat the quality that earned it nine Streamys nominations? Will Intern 2 ever learn to shut up? Seriously, is that Freddie Wong? We’ll learn soon enough.