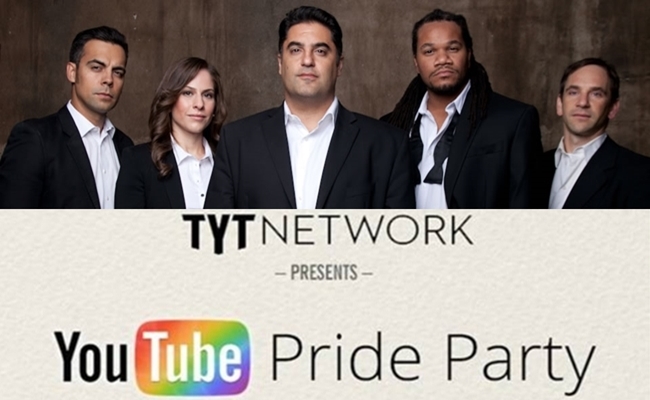 The Young Turks recently exceeded one million subs, and as it did when it crossed one billion views, the YouTube news channel is throwing a party. This time, however, the gala is not a self-congratulatory bash. Instead, The Young Turks are celebrating PRIDE by holding an event at YouTube Space LA in support of the LGBTQ community.

The party will reinforce the channel’s opposition of the Defense of Marriage Act and California’s Proposition 8, both of which are currently facing upcoming decisions in the Supreme Court. The Young Turks has long supported gay rights and has redoubled that position in recent videos.

The PRIDE Party will take place on June 27th, will include a live version of Dave Rubin‘s Rubin Report, and will feature notable LGBTQ talent and advocates from both the traditional and new media communities. “This has truly been a watershed years for LGBT rights and TYT has always been on the forefront of that, way before being pro-gay was cool,” said Rubin, who will also host the PRIDE party. “Being at a network where I know I’m valued for who I am and what I believe is all anyone can ask for.”

“TYT has always believed in equality for all and we see LGBT rights as the great civil rights movement of our generation,” added Young Turks COO Steven Oh. “With the impending Supreme Court decisions on DOMA and Prop 8, TYT and YouTube wanted to emphasize our unwavering support of human rights for all. Hopefully, we will have great reason to celebrate when these decisions are issued later this week.”

With seven-digit subscribers, a billion views, and a brand new entry in YouTube’s paid channels experiment, The Young Turks has a lot to celebrate. However, Cenk Uygur and his team want to show how celebration can also be a form of political activism, and with the PRIDE party, that is exactly what they are doing.