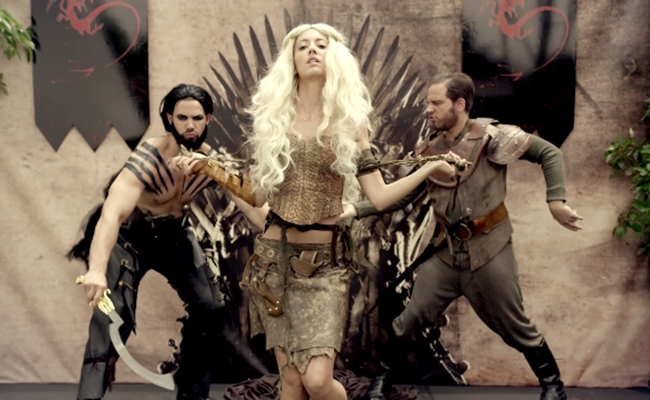 If you’ve been feeling left out while the rest of the Internet goes bonkers over Game of Thrones, it’s never too late to get hooked. In case you don’t want to slog through three seasons of medieval politics, behind-the-scenes scheming, and dwarf sex just so that you can see what all the fuss is about, YouTube channel Stage 5 TV has you covered. The geek culture hub has released a fantastic Game of Thrones rap battle, where most of the show’s major characters go up on the mic to explain why they are the best MCs in Westeros (and summarize most of the show’s plot in the process).

The video is free of spoilers from the latest episode, but does run through the previous seasons without restraint. For whatever reason, the battle is set at a kid’s birthday party, but the real focus is the 17 performers, a group that includes Taryn Southern as Daenerys Targaryen and 5 Second Films‘ Kelsey Gunn as Catelyn Stark. Special notice must be given to the guy who plays Samwell Tarly and absolutely nails his voice and mannerisms.

The Game of Thrones rap seems to be inspired by Epic Rap Battles of History, but it’s far edgier than the average ERB episode and just as entertaining. I suggested Tyrion Lannister as an ERB contestant months ago, so I’m glad there’s at least one channel out there that knows what’s up.