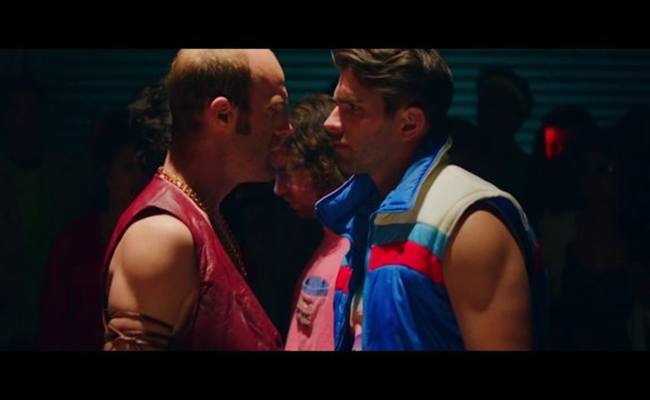 We recently noted how Above Average is attempting to flip the YouTube Original Channel script by utilizing the star power of SNL performers, but one of the channel’s most recent videos features celebrities of a different kind. Broadway Video‘s YouTube comedy feed is the home of ‘Finish What We Started‘, an 80s-inspired music video featuring contributions from Miles Fisher, Lance Bass, Joe Jonas, and a bunch of funny people.

The video accompanies a song by Fisher, who has previously crafted retro music videos based around 90s sitcoms and classic cult films. This time around, he goes even more old school, setting ‘Finish What We Started’ at an 80s-themed party where three men go through a training montage in order to get revenge on three other men who previous owned them on the dance floor. It’s You Got Served, but with more camp.

One of the three leads is played by Kyle Mooney, who gets a much fairer shake this time around than he did during his other YouTube Comedy Week performance as the narrator of its ill-fated live show. Lance Bass, who obviously has plenty of experience serving up ass-kicking dance routines, serves as the wizened sensei. Rounding out the star-studded crew is Joe Jonas, who helped Fisher write the song on which the video is based.

Above Average, which recently celebrated its first anniversary, is a strange home for the video, but I’m not complaining. Any video featuring multiple dance-offs is a winner in my book, no matter where it lives.