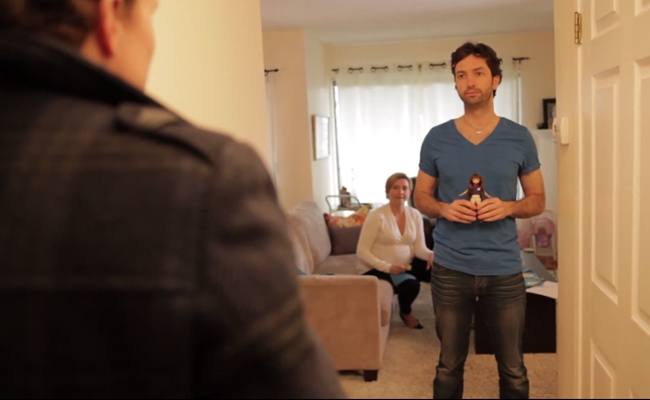 YouTube has no shortage of grown men acting like kids, but a new web series has introduced one of the most popular manchildren we’ve ever seen on the site. Creator and father Matt Clarke has launched Convos With My 2 Year Old, which twists his interactions with his young daughter by running them through the mouth of a fully grown man.

Convos With My 2 Year Old runs on the conceit that kids say the darndest things, which has always been a great way to get views on YouTube. The show gets that much funnier when you throw in the deadpan delivery of actor David Milchard, who plays Clarke’s child. I thought Milchard’s pink hair clip was a nice little touch.

In less than a week, Convos With My 2 Year Old has scored more than 3.6 million views, with the series’ channel bringing in more than 62,000 subscribers. Commenters on the debut episode are clamoring for more content, but the channel still houses just a single video. Perhaps it’s been a quiet week in the Clarke household.

The series succeeds because it is tailor made for its audience, featuring several elements that combine to form YouTube gold. Internet viewers love watching adult males act like small kids, with ‘Man Vs. Toddler‘ serving as my personal favorite example, and the short, conversational format is also perfect for a YouTube audience. When, at the end of the episode, we get to see how cute Clarke’s daughter is, it becomes clear that he has an embarrassment of YouTube riches on his hands.