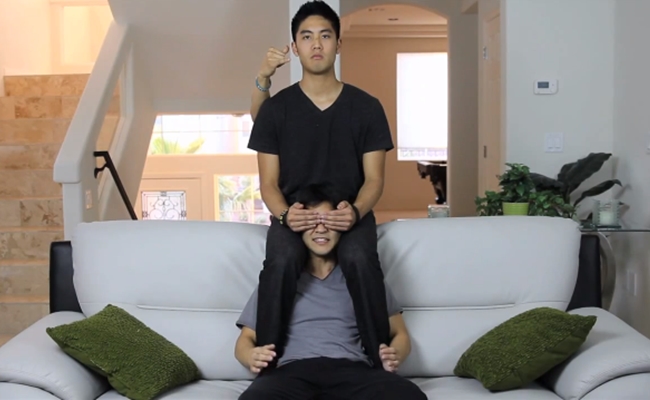 YouTube Comedy Week is still going strong, with a wide array of videos composing the event’s Thursday slate. In what seems to be a trend, the day’s videos come mainly from new media creators after a Wednesday slate that included many efforts from traditional media stars.

As per usual, a rundown of the day’s videos can be seen in a roundup video hosted by Todd Womack and Mark Douglas from The Key of Awesome. This time, they show a clip from Evan Gregory, whose new video we featured yesterday.

As was the case on Tuesday, many of Thursday’s highlights were regularly scheduled videos from YouTube channels. One of the most fun offerings is a YouTubers React episode where a bunch of people whose videos you’ve seen before try not to laugh at funny videos. I’m grateful that The Fine Bros are giving ‘Guy Runs Into Wall‘ the exposure it deserves.

A few other YouTubers got in on the fun. Ryan Higa turned in a solid effort by debuting the ‘Google Glass Human‘, a person-sized version of Google’s latest innovation. By the end, the video gives us some funny Abbott and Costello-esque antics. Another video from Black Nerd Comedy showed us what YouTube was like during medieval times, using an eerily similar concept to one of Above Average’s Comedy Week videos.

Today’s the last day of Comedy Week, so go forth and enjoy it one last time. Or, if you’re not feeling so hot about it, celebrate the last time you’ll ever have to hear about this (unless they try it again next year).