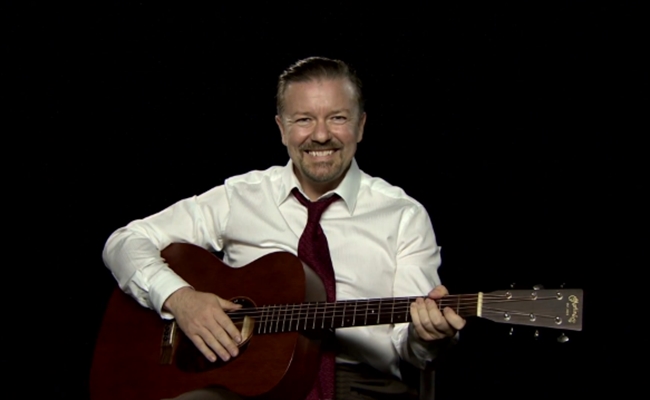 YouTube has brought in some big names to help hawk its upcoming Comedy Week, but the real appeal will be some of the big names providing content as part of the event. One such name is Ricky Gervais; the Office creator will launch a series centered around his David Brent character as part of the festivities.

Gervais will star as Brent, the self-absorbed, socially clueless boss from the British version of The Office, in a series called Learn Guitar With David Brent. As in the TV series that launched Gervais to stardom, Brent will heap praise upon himself while offering faint advice for his viewing audience. Check out the trailer, where he calls himself a “teacher, rebel, songwriter, rep.”

The show will debut on May 20th (the Monday of Comedy Week), and will live on Gervais’ official channel, which is partnered with YouTube and features content straight from the droll British comedian’s brain. Gervais previously dredged up Brent for the UK’s annual Comic Relief charity drive and released a ten minute special featuring the character back in May, but Learn Guitar will be the first series-length appearance for Brent since The Office ended its run on British TV nearly ten years ago.

The best part about Learn Guitar is the fact that it will continue past the end of Comedy Week, with the series continuing alongside the other offerings on Gervais’ channel. In that sense, YouTube’s celebration of funny people will have staying power, lasting for much longer than a week.