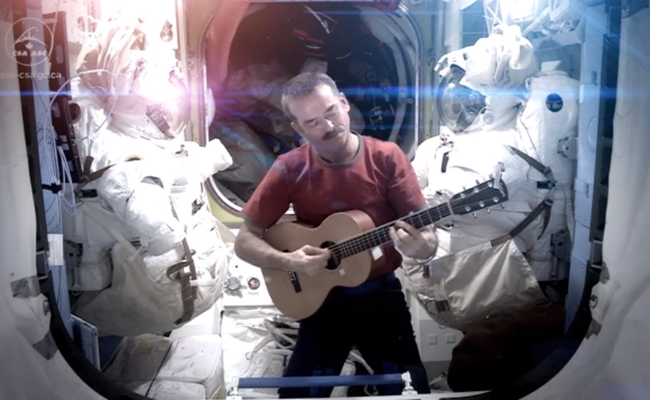 During Chris Hadfield‘s nearly five months aboard the International Space Station, the Canadian astronaut gained a substantial social media following. Hadfield’s pithy tweets and informational YouTube videos have made his a cult hero on the Internet (a title helped on by his epic caterpillar moustache). Hadfield has safely returned to Earth, but before he departed the ISS, he gave the Internet a treat in the form of a super cool cover of David Bowie’s ‘Space Oddity’.

The cover features Hadfield singing and playing guitar in zero gravity, and it’s amazingly cool because, well, space. I also have to applaud Hadfield for choosing a song about an astronaut who fails his mission and floats away to die. I think, if i were in his profession, that would freak me out a bit.

Hatfield’s unique musical effort has been viewed almost four million times on his YouTube channel, which now sports over 60,000 subscribers. Clearly, he has plenty of fans who will be eager to see what he cooks up the next he travels out of this world. I’m hoping he chooses to cover this song next.