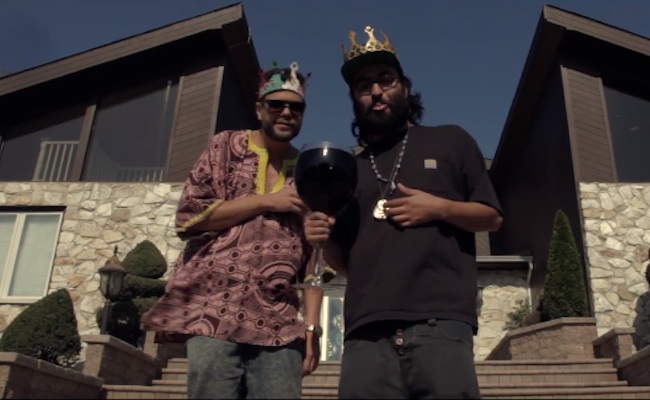 [Editor’s Note: Two major trends have emerged in the recent history of new media: 1) Music videos are the new music and 2) YouTube is the new MTV. With that in mind and to keep you up to speed with the greatest and latest in this online video category, Tubefilter has partnered with INDMUSIC, YouTube’s largest independent music network, to bring you at least one must-watch music video every week. Turn up your volume and we hope you enjoy the analysis, sites, and sounds. For moreMust-Watch Music Video installments, click here.]

Kool & Kass is the new collaboration from Kool A.D. (Das Racist) and Kassa Overall. Their new mixtape Peaceful Solutionsdropped last week along with two new videos for your eyeballs to ingest.

“Fresh Prince” highlights the group’s laid back, hook heavy delivery, which harkens back to the pair’s previous endeavors. Listen for a few seconds and you can tell this is easily themixtape of the spring. The duo have a way of infusing just the right amount of irony and comedy to keep it interesting, but they are most certainly not a joke, no matter the size of their comically large their grape-juice-filled wine glasses. (In fact I have it on good advice – from a friend, obviously – that massive wine glasses are more efficient than small ones.)

The video comes from the creative collective Eightsixfouth, an NYC based group that is quickly becoming responsible for some of the best new videos in the indie hip hop scene, like the one above and this passionate new video from Raheem Recess.

In juxtaposition, it’s clear that the overall direction of “Fresh Prince” must have just been “do your thang.” The video holds onto some of that “fresh 90’s flavor,” while being both an homage to our favorite rapper/Bel-Air resident and an absurdist comedy, riddled with clips reminiscent of Coolio.