Blip Targeting Both Men And Women With Upcoming Originals Slate 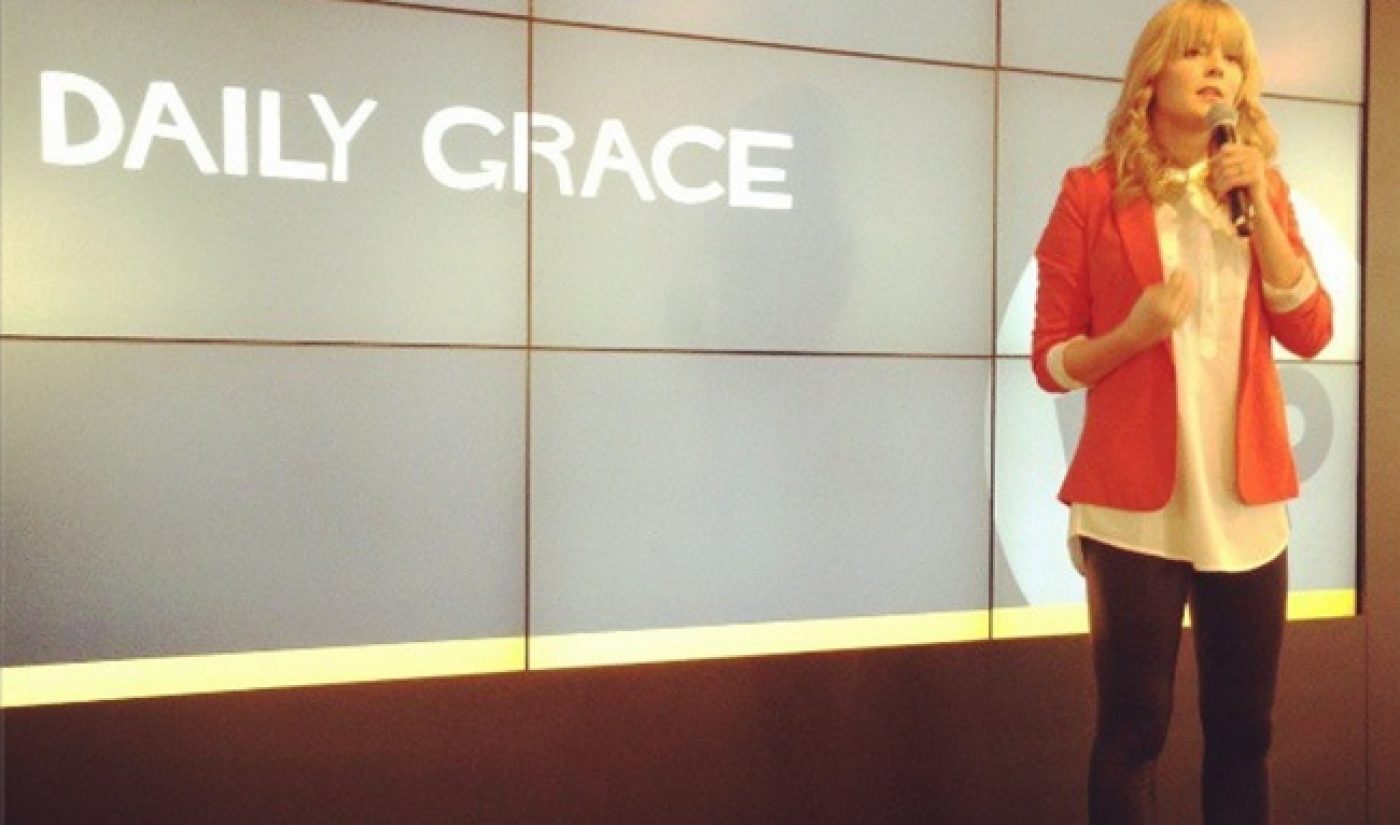 It’s been less than a year since Blip launched its Blip Studios wing, but the site’s Newfronts presentation showed that its original content library is very healthy and about to grow even bigger. The big news was Blip’s partnership with Ray William Johnson, but the platform’s representatives also touted several new and returning series, with a particular focus on creating content suitable for both genders.

The event’s host was comedian Rob Huebel, and his upcoming Blip series, Mainly Murder, was the first trailer shown. Huebel, who frequently interacted with the crowd and high-fived attendees, also introduced other important folks, such as My Damn Channel co-founder Rob Barnett, who discussed his company’s recent partnership with Blip.

Several of Blip’s upcoming and returning series are targeted at women; My Damn Channel’s Grace Helbig, whose audience consists mainly of young women, appeared at the event to discuss the proliferation of her Daily Grace vlog on Blip. In addition, a new series called Jewelry Star will bring a fashion competition to the site with the help of Emmy-winning designer Soyon An. Finally, Blip announced a second season of Hipsterhood, a cute romantic comedy that proved popular with female audiences.

Despite this girl power slate, Blip’s offerings will also include plenty of shows aimed at guys. Most notably, the site continues to have a close relationship with Rooster Teeth. Burnie Burns showed up at the presentation to discuss the new seasons of Red vs. Blue and The Gauntlet. Burns noted how Mashable one described Red Vs. Blue‘s fans as “the most male audience of any web series,” and the YouTubers who will appear on the new season of The Gauntlet (such as freddiew and SeaNanners) will only reinforce that stereotype.

The other notable item was the announcement of a deal with FreemantleMedia through which content from The Pet Collective will see distribution on Blip, a partnership that should bring in a sizable audience. It doesn’t matter if you’re a man or a woman; if you don’t like watching videos of corgis, I don’t know what you’re doing on the Internet.

Here is the full list, via the official press release, of what Blip discussed at its presentation:

New Series:
Mainly Murder: This comedy series follows a Long Island-based Murder Mystery entertainment company as they delight, scare and annoy their way across the outer boroughs of New York. Their dream is to one day make it to the big time – performing murder mysteries in NEW YORK CITY. And as they beg, borrow and steal their way to the “top”, they’ll get twisted up in each other’s lives, for better and mostly worse.
Jewelry Star: Jewelry Star is a competition show where up-and-coming jewelry designers compete to create custom jewelry for celebrities and high profile clients. Hosted by two-time Emmy Award-winning stylist Soyon An, the series challenges these designers to create unique and inspired pieces that will be judged by An and her VIP clients.
The Great S. Cape!: Created, written and produced by uber producer Michael Uslan (Batman Begins, The Dark Knight, Dark Knight Rises) for Blip, the 12-chapter cliff-hanging movie serial is a live-action, film noir adventure series featuring new superhero Stephan Cape. Unable to support himself in today’s world as a great magician and illusionist, Cape applies his amazing skills (and refusal to use a gun) to his newfound mission as a private detective. When he stumbles across the most insidious murder plot in today’s Hollywood, secret and powerful forces set out to stop him at all costs! Can he out-fox the foxes and solve one of the deadliest mysteries in Los Angeles history? Newcomer Ian Duncan stars as escape artist extraordinaire, Stephan Cape.
Returning Series:
Hipsterhood: This ironic series from producer Shilpi Roy gets inside the minds of two Los Angeles hipsters who keep seeing each other around their Silver Lake neighborhood, but can’t seem to take that next crucial step of actually…talking. The much buzzed about comedy returns for a second season.
The Gauntlet:
Also returning for a second season, The Gauntlet gives serious gamers and gaming super-fans from around the country a chance to compete in an epic video game competition that pits competitors against one another in an intense contest of gaming skills, concentration, agility and stamina. Inspired by reality competitions Wipeout and The Voice, The Gauntlet brings that passion for winning and chance for fame and fortune to the world of gaming.
Partnerships:
MyDamnChannel: MyDamnChannel will produce four original comedy series for Blip, including new seasons of MyDamnChannel hits Wainy Days and Daddy Knows Best, and two others currently in development. These series will premiere simultaneously on Blip and MyDamnChannel in exclusive 30-day windows, before being made available on other outlets, including YouTube. Sales teams from both companies will represent the new programming with advertisers, marketers and agencies targeting 18-34 year old fans of the best original series on the Internet. And for the first time, select series from the My Damn Channel library (going back to 2007) will be available on Blip, including Daily Grace and premium programming never before been seen by the Blip audience. This new partnership will bring brands the opportunity to reach a combined audience of nearly 40 million monthly unique viewers.
FremantleMedia: FremantleMedia and Blip are launching a brand-new Pet vertical on Blip powered by The Pet Collective. Fremantle is leveraging its key skills and talent in the digital space with an exclusive deal with Blip that offers Blip’s audience the power of The Pet Collective’s story-telling skills and high production values and enables FremantleMedia to expand The Pet Collective distribution across the web and cultivate new audiences. Featured series include The Olate Dogs and Henri the Cat.