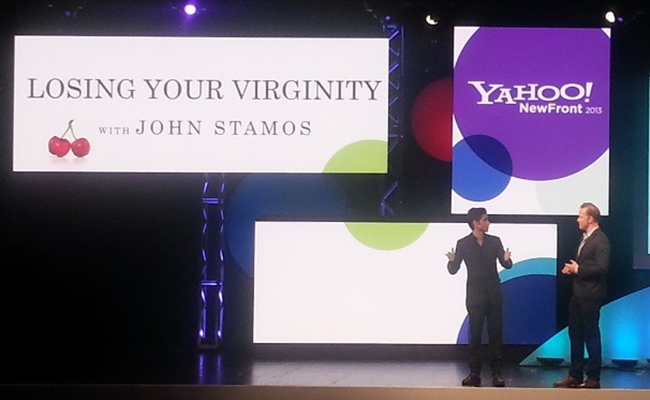 Yahoo is going for laughs. At the Best Buy Theater in Times Square, the popular website discussed its brand strategy during its Digital Content Newfronts presentation. In particular, Yahoo touted its upcoming comedy lineup, which will feature series from Ed Helms and John Stamos.

Eight comedy shows have been packaged together to form what Yahoo VP Erin McPherson called a “fall comedy lineup” and “fall TV on steroids.” All together, more than one hundred episodes will be released. Yahoo’s crown jewel, Burning Love, which scored more than 11 million views during its first season, will headline the lineup, with other star-studded shows making their debut.

The most significant new announcement regarded Tiny Commando, a new series created by Ed Helms. Helms appeared at Newfronts, piloting a toy plane onto the stage to show off his love of remote-controlled vehicles. True to form, Tiny Commando will be a mock action series starring a pair of four-inch tall characters and the toy vehicles they use for transportation/battle. Chuck‘s Zachary Levi will star in the titular lead role, with Helms playing his arch-nemesis, Cesar Pequeno, who has a thumb for an arm. Yeah, it sounds pretty silly. Nick Kroll, Gillian Jacobs, Rob Corddry and Tom Lennon will also appear.

Along with Tiny Commando, the comedy block will also feature previously announced shows like The Fuzz and Ghost Ghirls along with a few other debuting series. John Stamos and Morgan Spurlock took the stage to discuss Losing Your Virginity With John Stamos, where the former Full House star will talk to celebs about their first time. Actresses Cheryl Hines and Rachael Harris also appeared to discuss We Need Help, a Vuguru and Principato Young-produced series where the two leading ladies will fight over who gets to control their hapless assistant.

Beyond comedy, Yahoo rolled out several new series across all categories. YouTube fashion sensation Michelle Phan will star in Fashion Trotters, where she journeys all over the world in search of the latest trends, while Big Show appeared to celebrate a new partnership between Yahoo and WWE.

“Yahoo!’s unique mix of content and technology leads not only to powerful and personalized experiences for our users, but also to greater distribution for our partners and higher return for our advertisers,” said Yahoo COO Henrique de Castro.“What we’re showing tonight signals where Yahoo! is headed: beautiful product experiences, exciting new content, big partnerships with the largest media brands, and extraordinary new ad experiences.”

De Castro asked advertisers to sink 5% of their TV budget of just one brand into Yahoo. Clearly, he understands that while the online video space is growing in popularity, it is still an area meant to complement TV, not overtake it. Yahoo’s new shows should do just that by providing solid, accessible entertainment.