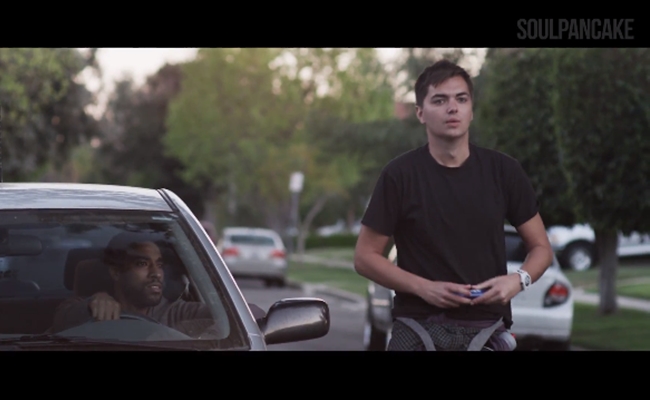 We recently noted just how advantageous collaborations can be for top YouTube channels, and one of the site’s hottest channels continues to embrace that notion. SourceFed‘s Elliott Morgan and Exit Strategy‘s Jameel Saleem star in the most recent episode of The Flipside, Soul Pancake‘s philosophical series of one-off sketches.

The video, titled ‘The Watch’, features Morgan stars as a man who wishes to travel thirty miles to give a family heirloom (no, not that one) to an ex-flame. Saleem plays his beleaguered best friend who drives beside him the whole way. Though both of its leads have plenty of comedic ability, a more serious tone is present, with ‘The Watch’ attempting to answer the thought-provoking question of “Who really matters to you?”

Morgan is not the first YouTuber to appear in an episode of The Flipside. Hannah Hart gave an intriguing turn on the series late last year, and its first episode featured Chester See. The home of Kid President has grown tremendously in the past few months, and bringing in familiar faces is one way it is gaining such upward momentum. Also, bringing in the President of the United States didn’t hurt, either.