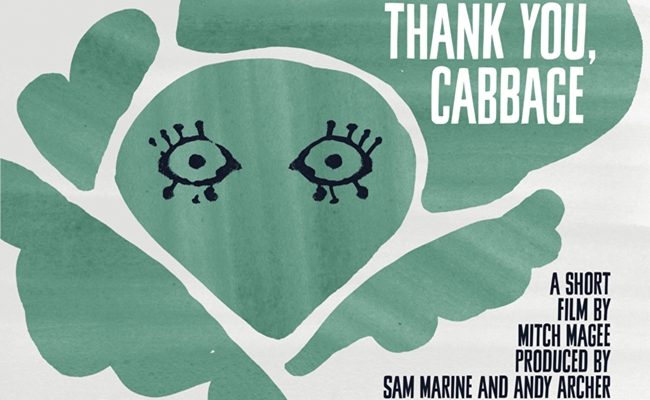 Creator Mitch Magee‘s Sexual Intercourse American Style and Mister Glasses both got on our radar back in 2009, but the UCB alum is hoping to branch out with a slightly more serious project. Magee is seeking funding on Kickstarter for Thank You, Cabbage, a short film about a clairvoyant vegetable and its relationship with a writer on a book tour. No kidding.

Magee assures his potential donors that Thank You, Cabbage will be a comedy, but it will have a more serious element not present in his web work. After all, the film’s description reads like a mix between a psychological thriller and The Annoying Orange. “Allison Segal is an author about to embark on a three-week tour to promote her memoir,” it says. “Unfortunately, the memoir is a fabrication and the prim and tidy persona she created for herself is a lie. Over the three weeks of her tour, Allison unravels, revealing her authentic, damaged self to her fans and winding up with a new idea for a book. Also, there’s a cabbage.” Sounds like someone’s been eating too much kimchi.

Magee is working with CollegeHumor exec Sam Marine on the production (he has produced content for the popular comedy site on several occasions), so we be sure Thank You, Cabbage will bring laughs, even if the whole ordeal seems to be wrapped in a bizarre, Lynchian veggie fantasy. If you’re intrigued, it still needs to raise another $30,000 to reach its goal. Judging from the quality of Magee’s previous work, this is a project you can trust.