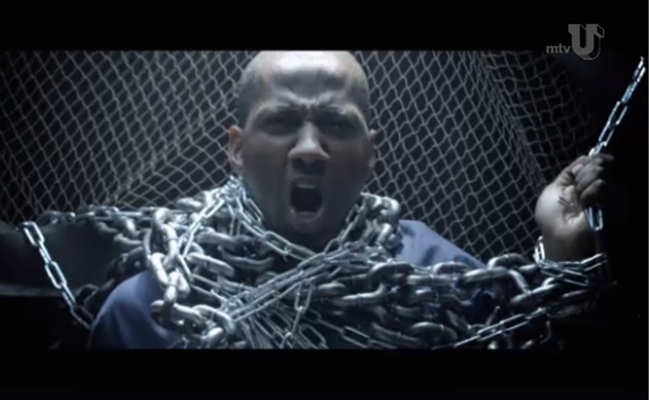 Wassup world! Your boy DeStorm has officially gone mainstream. The YouTube-famous rapper with more than 1.2 million subscribers to his credit has debuted a music video for his new single, “King Kong“, on MTVu.

“King Kong” is a cut from DeStorm’s recently released mixtape of the same name, and though the astronauts he teased in an Instagram shot don’t show up in this particular video, the whole thing is pretty sharp and jives well with the aggressive, percussive nature of DeStorm’s rapping and beats. In the video, DeStorm is a janitor, but then he’s chained up like a beast, then he’s a janitor again, then he’s neither. That’s the best written description I’ve got; honestly, “King Kong” speaks for itself.

“King Kong” premiered on MTVu, reminding us that there is still a place in the MTV network for actual music videos. Do people still watch music videos? If they do, then perhaps “King Kong” can get some mainstream attention and give YouTube’s favorite rapper the airplay he deserves. Personally, though, I feel there’s only one place where people still watch music videos: On YouTube. DeStorm’s already got that base covered, but I expect the “King Kong” video to quickly become one of the most viewed entries on his channel.

Of course, with YouTube views now factored into the Billboard charts, DeStorm has another route to pop awareness. He’ll get plenty of online reach thanks to his large subscriber count, so if he can score even a modest amount of airplay, he’s got a chance to reach the charts. It’s another example of how the new Billboard system is slightly flawed, but that’s not DeStorm’s fault. He’s a talented rapper, one who has worked hard for years, and he would deserve any theoretical rise to the top of the charts.